Crystal Lake is a fictional small Northeastern American town featured in the Friday the 13th film series. Located in or near Wessex County, New Jersey, the town of Crystal Lake takes its name from the nearby body of water also named Crystal Lake. However, after the string of murders committed by Jason Voorhees in the early 1980s, the town changed it's name to Forest Green in an attempt to distance itself from the mass murderer.

After Jason's reappearance about 10 years later, the town once again returned to the name Crystal Lake for unknown reasons. It has been theorized that the return to the old name was motivated by a desire to attract tourism.

Crystal Lake's most famous landmark, other than the lake itself, is Camp Crystal Lake, an abandoned summer camp for children a few miles away.

Camp Crystal Lake, also known as Camp Forest Green, and, more commonly Camp Blood, was a summer camp for kids in the Friday the 13th film series. Located in or near Sussex County, New Jersey, Camp Crystal Lake was most infamous for being the home of serial killer Jason Voorhees and the site of many of his murders.

The Camp was established in 1935 by the Christy family. For 22 years, Camp Crystal Lake operated peacefully and developed a good reputation until 1957 when Pamela Voorhees was hired as a cook. Her deformed special needs son Jason attended Camp Crystal Lake with his mother for the summer season. Under circumstances which remain unclear, though as seen in Freddy's penetration into Jason's subconscious in Freddy vs. Jason, Freddy was pulling him down, Jason was pushed into the lake and drowned. The Christys closed the Camp for the season probably to allow for an investigation or to avoid a scandal or both.

The Camp reopened the next season in 1958 and Pamela was rehired by the Christys against their better judgment and the counselors Barry and Claudette who were associated with Jason's apparent death, were cleared of any wrongdoing and rehired. Pamela, seeking revenge on the counselors she blames for her son's death, murdered Barry and Claudette, the two of the counselors as they were preparing to have sex. This apparently forced the Christys to close the Camp Crystal Lake. There were apparently many attempts, probably by the Christys to reopen Camp Crystal Lake over the next few years beginning in 1962, but none were successful. Reasons for the continued failure were blamed on everything from fires to "bad water". Although there was no definite evidence, it seems likely that these problems may have been caused by Pamela herself.

In 1979, a hope to resurrect the failed summer camp came when Steve Christy made another attempt to reopen Camp Crystal Lake. This time, no longer content to simply sabotage, Pamela stalks and kills nearly all of the new camp counselors beginning with a cheerful and spirited young girl named Annie Phillips who was possibly killed off the property in the woods surrounding it. She apparently succeeds in preventing the reopening of Camp Crystal Lake but loses her own life in the process. As Jason was never drowned, he witnessed his mother's death at the hands of Alice Hardy the only survivor of the of the first massacre, this event marked the beginning of a new and far more deadly streak of murders and terror that would plague the Camp, the town, and the general area for over twenty years or more.

For years starting in 1984, the Camp was closed and forbidden by law for anyone to be there but that did nothing to stop trespassers like Jeff and Sandra from going there or people dying on the property for years to come, or places near it like Higgins Haven. Camp Crystal Lake remained closed until it's appearance in the film Friday the 13th Part VI: Jason Lives in which it was called Camp Forest Green. This time, it was Jason himself, recently resurrected by Tommy Jarvis, who prevents the reopening by slaughtering the counselors. A new camp was built next door, but also closed after Jason slaughtered many counselors in the June of 1984.

When last seen in the film Freddy vs Jason, it appeared that new construction had been begun on the camp in yet another attempt to reopen. However, the massive damage caused to the camp by the battle between Jason and Freddy Krueger would most likely have been sufficient to ensure that it remained closed. It seems that Pamela Voorhees' wish that the camp never reopen has been fulfilled. Since the trail of devastation and wildfire of 2003, destroyed the construction site, there have not been any recent attempts to reopen the camp.

Camp Crystal Lake, the once thriving summer camp for children had 21 years of uninterrupted good times. Until the Christy family hired Pamela Voorhees who brought along her deformed and special needs son who drowned in the lake in the summer of 1957. After that, in 1958, it became infamous for a streak of murder, pestilence, arson, and supernatural occurrences that took places on its grounds. The failed attempt to reopen it in 1979 set off a chain of events that led to the deaths of dozens of teenagers and adults. The Camp was well-known and fully documented hundreds of years into the future even when Earth was no longer inhabited and humanity has moved into space and settled on other worlds. 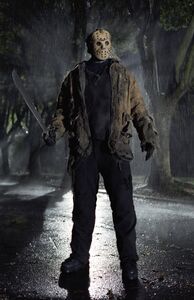 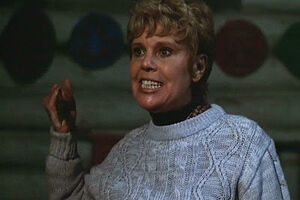 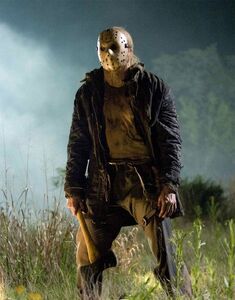 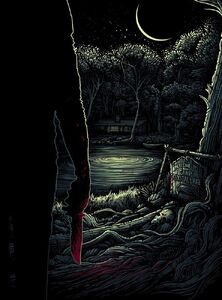 Add a photo to this gallery
Retrieved from "https://evil.fandom.com/wiki/Crystal_Lake?oldid=61109"
Community content is available under CC-BY-SA unless otherwise noted.