Formed during the formation of the planet Thra

The Castle of the Crystal

Podlings (both through the influence by the Skeksis)

Beam emission (during a Great Conjunction)

Be used by the Skeksis to drain the essence of both Gelflings and then Podlings.

The Crystal, known as "The Crystal of Truth" and the "Dark Crystal", is a very powerful jewel and the titular main item of the 1982 fantasy film The Dark Crystal. It was the living heart of the alien planet Thra, and one of many crystals scattered throughout the universe.

The Crystal was quartzlike in shape and was rombohedral at its top and base, with a threefold symmetry. Its color was originally a pristine white, before shifting to a dark wine purple due to being weakened from its use by the Skeksis.

The Crystal was first created during the formation of the planet Thra, forming in and then encased within a mountain in the Bah-Lem Valley. It essentially serves as the planet's "beating heart", the Crystal's energy resounding throughout and establishing a link to all of Thra's native inhabitants. It is established that when a native creature dies, its essence will be given to the Crystal, revitalizing it at a time.

Arrival and Stewardship of the Fallen urSkeks

999 and one trine after the formation of Thra, the Crystal was hit by the rays of the first Great Conjunction, which allowed the Fallen urSkeks to enter Thra. Promising "peerless gifts" to Thra's inhabitants, the urSkeks demolished the mountain encasing the Crystal, and formed a vast crystal fortress modeled on their homeworld around it.

Although the majority of Thra's inhabitants appreciated the cultural and technological innovations brought by the urSkeks, they were resented by Aughra's son Raunip, who saw the UrSkeks' taking residence in the Castle as an act of appropriation. Inciting a mob of Gelflings to attack the Castle, Raunip confronted the UrSkeks, demanding that they relenquish the Crystal. The UrSkeks replied that it belonged to all of Thra, and was not theirs to give. Further escalation was prevented by Aughra's intervention.

The Fallen urSkeks, with Aughra's assistance, planned to use the light of the Crystal to purify themselves of their darker natures and return home during the second Great Conjunction. The urSkeks created a network of mirrors around the Crystal, which would focus the rays of the Three Suns shining down on the Crystal onto each of them, thus burning away the evil in their souls. However, when the Great Conjunction began, one urSkek gave into its darker nature, resulting in the Great Division of the UrSkeks into the Skeksis and the UrRu.

In the ensuing confusion, a Skeksis attacked the Crystal and chipped off a shard. Such shard would be later found by SkekGra the Heretic, who would defect from the Skeksis, and his UrRu counterpart UrGoh the Wanderer to be placed in the forged Dual Glaive.

Stewardship of the Skeksis

The Skeksis took control of the Castle, proclaiming themselves "lords" of the Crystal. They initially tried to create a Crystal of their own, but only succeeded in building useless black rocks, which they reused for their Trial by Stone tournaments. Although initially benevolent in their rule, the Skeksis became increasingly violent as they became aware of their own mortality. They initiated the Ceremony of the Sun, which made use of sun rays from lesser Conjunctions hitting the Crystal in order to prolong their lives.

The Skeksis later found another way to rejuvenate themselves with the Dark Crystal, which is draining the essence of living things and storing them into vials. Gelflings were the first victims of the Crystal, the initial one being a Gelfling named Mira, who is killed after her essence is taken away. Later on, more Gelflings were extracted of their vitality and killed, driving the race into near extinction. Podlings replaced the Gelfling as the next victims; however, the former never perishes after their essence is drained, rather they become pale and feeble slaves to the Skeksis.

The Dark Crystal is also responsible for the Darkening, a noxious energy which emanated from it whenever the Crystal was abused, causing plants to wither and native animals becoming hostile and aggressive until they die. The Emperor SkekSo, for thousands of trine, is shown to have been harnessing the Darkening through his scepter, which contains a small crystal with properties similar to the Dark Crystal.

The Skeksis, without SkekSo due to the Emperor dying and unable to attend the Ceremony of the Sun, use the Crystal once again to replenish their lives. This time, they plan to permanently become immortal in the incoming Great Conjunction. At the same time, the leader of the UrRu UrSu sends Jen (a Gelfling and the hero of the film) on a journey to retrive the Shard of the Division from Aughra's observatory and heal the Crystal. The Gelfling eventually succeeds in healing the Dark Crystal, triggering the reunification of the Skeksis and Mystics into the UrSkeks and the return of flourishing fauna back to Thra.

The Crystal of Truth, in Thra's earliest days. 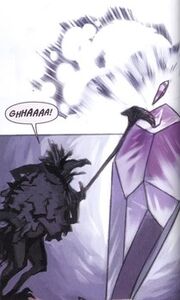 A Skeksis cracks the Crystal of Truth. 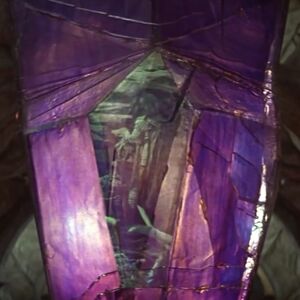 The Crystal of Truth 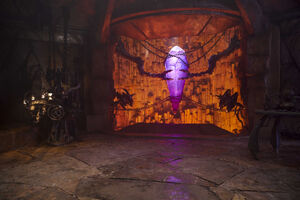 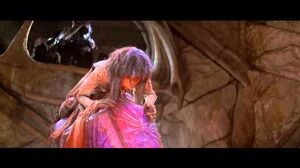