The Crystals is the name of mystical crystal balls used as a tool by Jareth the Goblin King along with his magic powers and they are featured in the 1986 dark fantasy movie Labyrinth. He is typically seen twirling one or more around in his hands.

They hold much power when in his hands, including the ability to change form and cause hallucinations. He can also view any part of the Labyrinth, and possibly outside as well, using these crystals.

Jareth offered such crystals as gifts to those he desired. The last crystal he would ever posess was offered to a human girl named Sarah Williams who realized her terrible mistake of wishing her baby half-brother Toby away. The crystal popped like a bubblewhen Sarah herself remembered the magic words that would bring Jareth to his end. 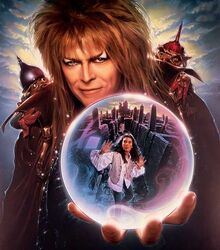 A poster artwork of King Jareth holding a Crystal. 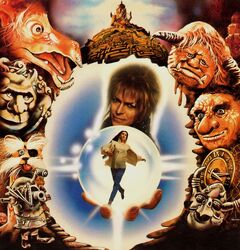 A poster artwork of Jareth holding a Crystal.
Add a photo to this gallery

Retrieved from "https://evil.fandom.com/wiki/Crystals_(Labyrinth)?oldid=48317"
Community content is available under CC-BY-SA unless otherwise noted.