The Crystals are precious jewels with unnatural properties and important objects featured in the Land of the Lost franchise. They are notably used by Enik and Shung.

In the original series, they are a variety of colourful brightly glowing crystals that can be found within the caverns of the Lost City and in the Pylons. They were presumably created by the Altrusians in order to use them as a power source for their technologies. There are varius color such as red, blue, yellow, and green, and all of them have different powers (telepathy, cause hallucinations, etc.). Combining two Crystals or more together can cause amazing effects such as explosions and force fields.

As an Altrusian, Enik is an expert in the Crystal manipulation. He is able to manipulate the Crystals in the Pylon tables in order to configure the destination of dimensional gateways. In addition, he possesses a bracelet of red crystals that can cause hallucinations and also a large Crystal suspended in a tetrahedral frame called a Magetti that ca be used to locate dimensional doorways.

In the 1991 series, they are a peculiar type of quartz-like crystal that can be found in various caverns. They are primarily used by Shung, which often use Pakuni slaves to mine them, including Stink's parents before their death. In this version, the Crystals can function as an energy source and also cause illusions, and the largest of them, like Shung's Sword, are extremly powerful. The Crystal Sword gives to Shung both telekinetic and telepathic powe, and even him the ability to control minds, but it also gradually corrupts his mind and makes him addicted to its energy.

In the 2009 movie, the Crystals are slightly different from the original TV series. They are mainly used by Enik, and also apparently by the Zarn. In this version, the Crystals can be used to show hologram, but but more importantly to control the Sleestaks' minds. They can also open dimensional portals when they are combined with the Tachyon Amplifier. In addition, Enik seems to be able to use the Crystals to send telepathic messages and to detect the Tachyon Amplifier presence. When he touches the Crystals in the Pylon table, they change color. He can also control the Sleestaks by using the Crystal of his necklace. 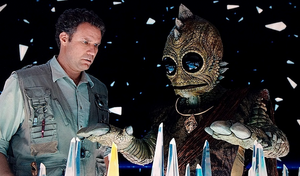 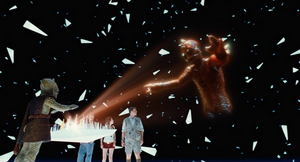 Enik using the Crystals to show the Zarn's hologram. 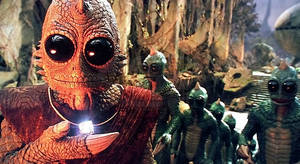 Enik controlling the Sleestaks with his Crystal. 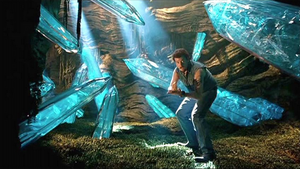 Add a photo to this gallery
Retrieved from "https://evil.fandom.com/wiki/Crystals_(Land_of_the_Lost)?oldid=63891"
Community content is available under CC-BY-SA unless otherwise noted.