The Daemon Ritus is a mystical, ancient magical relic and a key plot element in the 2002 Scooby Doo live-action film. Legend has it that it is capable of absorbing any living organism's vital energy.

The Daemon Ritus is the key to conquer Earth by the hands of ancient demons, after completing the evil "Darkopolypse Ritual". Scrappy-Doo who was changed by the Daemon Ritus' supernatural magic, used the relic to control the demons, morph into a powerful giant monster, and try to destroy Mystery Inc., with obvious failure. 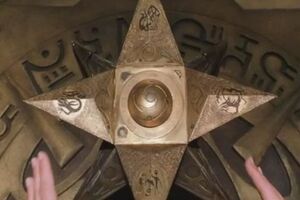 The Daemon Ritus
Add a photo to this gallery

Retrieved from "https://evil.fandom.com/wiki/Daemon_Ritus?oldid=47515"
Community content is available under CC-BY-SA unless otherwise noted.