Outside the city of Agrabah

The Crystal of Ix

To trap Genie inside the Crystal of Ix as part of Mozenrath's evil to steal his magical powers.

The Dagger Rock, as it's name implies, is a dagger-shaped rock in a gloomy canyon within a desert outside the city of Agrabah and a location in the titular episode The Secret of Dagger Rock of the Aladdin TV series.

Aladdin and Jasmine go to an oasis on Carpet wanting to spend romantic time together. They are about to share a kiss when they hear a noise and notice a small fox caught by its foot in a bear trap. Aladdin frees the fox, who runs over to Jasmine. When Aladdin walks to them, he finds his foot stuck in black goop and the fox turns out to be the foul creature Xerxes in disguise. And his master Mozenrath appears and tells Aladdin that he wants Genie. When Aladdin tells the sorcerer that Genie isn't with them, Mozenrath decides to take Aladdin hostage. Jasmine attempts to rescue Aladdin, but the goop soon becomes a crystal ball which turns into a marble and Mozenrath catches it. Mozenrath then tells Jasmine that if she ever wants to see Aladdin again, then she must deliver Genie at the place called Dagger Rock by nightfall. He also intructs her not to send any guards, if she does so then Aladdin will pay and he and Xerxes vanish.

Jasmine goes back to the palace and tells Genie of Aladdin's abuduction and of the sitution with Mozenrath. Genie tries to assure Jasmine that he can take care of Monenrath, but Jasmine tells Genie it is obviously a trap as he wants his magic and reveals that she will rescue Aladdin herself. However, her father objects to her idea, claiming it is too dangerous. Jasmine tries to protest, but he assures Jasmine that he will send the guards rescue Aladdin, Jasmine tries to tell him that's what Mozenrath expects. However, the Sultan refuses to listen and sends Jasmine to her room.

Enraged, Jasmine still decides to save Aladdin herself. She then decides that she and Genie disguise themselves as guards to go to Dagger Rock and they have to leave Iago and Abu at the palace, otherwise they'll get caught. Four guards ride on camels to Dagger Rock. Jasmine and Genie get rid of the last two and take their place. Jasmine sees that the guards are going the wrong way and tries to let them know, but she has to talk like a man. After Genie tells her how to do so, Jasmine tells Razoul that Dagger Rock's the other way.

Meanwhile, inside a mountain pass that looks like a large cavern, Mozenrath releases Aladdin from the black marble and he gets stuck to the rocks with black goop. Mozenrath talks to Aladdin about how Genie will be his. Aladdin however tells the sorcerer that he lost the fight the minute he made Jasmine mad, but Mozenrath isn't scared of her. Xerxes flies near the sand dunes and sees Jasmine, Genie, and the guards on their way to Dagger Rock. The eel goes to the caravan and flies around them. Jasmine captures him with Razoul's turban, but he later manages to set himself free and flies away. Meanwhile, Abu and Iago are sitting at the window wondering when everyone is going to come back, begining to grow more worried for them.

Back at Dagger Rock, Xerxes goes to Mozenrath and tells him that he did not find Genie, since the jinn was in disguise, Mozenrath then decides to send his mamluks to attack the group. Back at the desert, the caravan runs into Mamluks. They Razoul and Fazahl fight them off as best they can but they are no match for them, Jasmine and Carpet then blind them while Genie fights the Mamluks. Back to Abu and Iago, Iago tells Abu that they can catch up with the others but then changes his mind, which annoys the monkey.

Meanwhile, Mozenrath and Xerxes see that the Mamluks have been defeated. The sorcerer makes two pieces of rock which then becomes giant hands and they capture everyone. Jasmine loses her disguise in the process of being captured and the guards are in shock to see that it is really the princess. Jasmine frees herself, but falls and Carpet catches her. Genie fights the hands and they get defeated. The sun sets at Dagger Rock and Mozenrath is losing his patience, because he does not have Genie, the evil conjuror is about to destroy Aladdin, but Jasmine shows up just in time to stop him. A fight then soon ensures between them.

When Mozenrath is about to zap Jasmine, Xerxes shows the sorcerer that Genie is here, rescuing Aladdin. Mozenrath pulls out a crystal, the Crystal of Ix, to trap Genie, but it traps Xerxes instead. After releasing the eel, Mozenrath reveals a giant crystal, which is about to trap Genie. Aladdin tries to save him, but loses his grip. However, before Genie gets far, the black goop is still stuck in Aladdin's hand and it stops Genie from going inside the crystal. When Mozenrath is preparing to zap the two, Jasmine grabs his cape and traps him in the crystal beam, with Xerxes.

Everyone is back at the palace, with the guards telling the Sultan how Jasmine defeated Mozenrath. While everyone is proud of Jasmine, Genie realizes that Abu and Iago are missing. The animals are revealed to be at Dagger Rock, preparing to fight Mozenrath. However, they see that nobody's there and begin to believe they were sent wrong directions, and they collapse against the Crystal, with Mozenrath and Xerxes still trapped inside it. 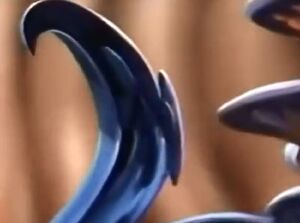 A view of the Dagger Rock.
Community content is available under CC-BY-SA unless otherwise noted.