Rainbow Brite and the Star Stealer

To remain as the lair of the Dark Princess.

The Dark Castle, also known as the Dark Fortress is a dark metal palace that is on a piece of stone and a location featured in the animated film Rainbow Brite and the Star Stealer. It is the lair of the evil Dark Princess.

The Dark Castle is located on the Princess' planet on the water on a big piece of rock. The structure seems have the appearance of multiple buildings melded together on top of one another. There's a giant water wheel with pipes below it as well. It has 4 metal support beams on each of the side around the rock. There was a bridge to the front gate from the rest of the planet, but the it can be rolled in. There is a booby trap long rotating slide which leads to a elevator. The princess's throne is located at the top. The dungeon is on a different rock on stairway across from the castle. 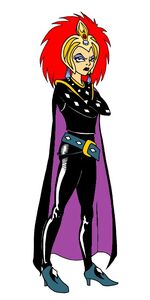 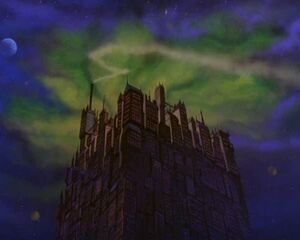 The Evil Castle
Add a photo to this gallery
Retrieved from "https://evil.fandom.com/wiki/Dark_Castle_(Rainbow_Brite)?oldid=50574"
Community content is available under CC-BY-SA unless otherwise noted.