The Dark Spirals (in Japanese: イービルスパイラル, Ībiru Supairaru, lit. "Evil Spirals") are the advanced version of the Dark Rings and powerful high-tech creations in shape of spiral ring-like bracelets, designed by the Digimon Emperor to enslave and brainwash other Digimon to his control.

The Dark Spiral is an upgraded version of the Dark Ring, formed by connecting several Dark Rings together into a spiral. It can control Digimon up to the Ultimate level, as well as operate away from Control Spires. Dark Spirals are inscribed with DigiCode which reads (in Japanese: イービルスパイラル, Ībiru Supairaru, lit. "Evil Spiral").

In attempting to stop the DigiDestined, the Digimon Emperor also discovered that his Dark Rings had some limitations of their own. When the heroes reminded Andromon of his past, the Ultimate-level Digimon was able to break free of the Dark Ring's control and destroy the local Control Spire himself. Later, the Emperor's attempt to force a newly-turned Greymon to digivolve to MetalGreymon ended in similar disaster; Greymon instead Digivolved to SkullGreymon and went on a rampage.

The latter incident caused the Digimon Emperor to realize that Dark Rings could only successfully control Digimon up to the Champion level. He then created the Dark Spiral, which worked perfectly; using it, he was able make Agumon Digivolve into a virus-type MetalGreymon and control him with ease. The Emperor eventually lost MetalGreymon to the heroes once more, but his new Dark Spirals allowed him to expand the ranks of his minions to much stronger Digimon, such as Digitamamon and ShogunGekomon.

Much later on, it is revealed by Myotismon that the design for the Dark Rings and Dark Spirals were based off of Gatomon's tail ring. The details of this are unknown. 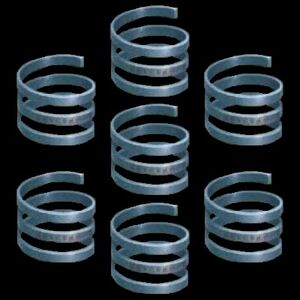 Evil Spirals
Add a photo to this gallery
Retrieved from "https://evil.fandom.com/wiki/Dark_Spirals?oldid=92671"
Community content is available under CC-BY-SA unless otherwise noted.