The Evil Wiki
Register
Don't have an account?
Sign In
Advertisement
in: Villainous Tools and Other Items, Corrupting Influence, Dark Forms,
and 2 more

Dark Spores (also called "Dark Seeds" in the Japanese version) are sinister devices in the form of spikey black spores that slowly drives their human hosts evil while increasing their intelligence and athletic ability. They grow into Dark Flowers and eventually Dark Trees.

The first known Dark Spore came into being during Ken Ichijouji's first adventure in the Digital World. When Milleniummon was destroyed, his data turned into Dark Spores and one buried itself into Ken's neck, exerting its influence on him. Since then, it grew within Ken and was later harvested and implanted into other children by Yukio Oikawa.

Dark Spores slowly and subtly increase the intelligence of their human hosts to genius levels as well as greatly increasing their athletic abilities. However, just as they increase the abilities of their hosts, they also slowly and drastically alter its host's personality towards evil tendencies. The effects of the Spore can be negated, however, such as when Ken realized that he had done terrible things, and later on when he befriended the other DigiDestined.

When cloned, the Dark Spores themselves will eventually bloom into Dark Flowers and will grow from there into Dark Trees, killing the human host. When Yukio Oikawa implanted the Spores into several children, however, he harvested the Dark Flowers before they could become Dark Trees. Knowing that Dark Spores fed off the innocence that allowed a child to travel to the Digital World, he intended to use them to travel to the Digital World himself. In reality, he was being controlled by Myotismon who used the Dark Flowers to gain power and become MaloMyotismon. He deceived Oikawa into going to a world made up of wishes in an attempt to finally kill the DigiDestined before he was killed himself.

In addition, Daemon is also interested in Ken's Dark Spore, but he is sealed within the Dark Ocean before his purpose is revealed. 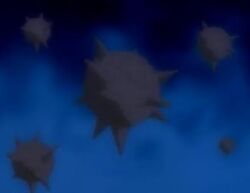 The Dark Spores are also called "Dark Seeds" in the Japanese version of Digimon Adventure 02.
Community content is available under CC-BY-SA unless otherwise noted.
Advertisement