The Evil Wiki
Register
Don't have an account?
Sign In
Advertisement
in: Dark Forms, Evil Realms, Elementals,
and 3 more

The Darklands is a secret kingdom on a alien planet that is inhabitated by strange shadowy creatures and it is ruled by the Master of Darkness. It is a location in the videogame Heart of Darkness.

The Darklands, also called the "Dark Kingdom", is an entire region covered in shadows by a giant dark cloud that came from a swirling tornado filled with dark energy from within a sinister castle surrounded by a lava moat at the center of the Darklands. It is filled with vast canyons and even a whole ground composed of hollow magma.

During the eclipse, Andy's dog Whiskey is taken away by an unseen creature. Andy jumps inside a spaceship to find Whiskey. He takes off and finds himself in the Darklands, which is a portion of another dimension called the Heart of Darkness. Inhabited by creatures of the night and ruled over by an evil sorcerer that's known as the Master of Darkness, the Darklands are extremely dangerous. Andy must find it in himself in order to rescue Whiskey and find a way home.

Upon crashing, Andy finds himself in a canyon on the outskirts of the Darklands. Here, his gun is eaten by a giant monster. Andy manages to escape into the swamps, only to run into more danger while unarmed. Meanwhile, the Master of Darkness is abusing his servant when a winged shadow arrives with a sack that has Whiskey in it.

Angered by the mistake (the shadow was supposed to capture Andy), the Master of Darkness kills the shadow and takes his anger out on his servant by throwing him at a spiked wall. However, the monster that swallowed Andy's gun appears, accidentally saving the servant, and explains Andy being in the Darklands.

The Master of Darkness then orders his minions to search the Darklands for him. Deep in the swamp, Andy saves a winged creature that's named Amigo that starts to carry him to his home island, but is dazed by a fireball that was thrown from a winged shadow and drops Andy into a lake. At the bottom of the lake, Andy comes across a magic rock that grants him the power to manipulate plants and destroy enemies.

After resurfacing, Andy is rescued once again by Amigo, who takes Andy back to his home and introduces him to his people. Andy wins their approval by creating an apple tree for them. The Amigos then agree to hide Andy in their village, but the shadows attack and destroy the village when night falls. However, Andy manages to slip away. After reuniting with the Amigos, Andy witnesses an Amigo fall to the evil ground, and becomes a winged shadow within contact. Andy convinces the Amigos to obtain the magic rock's power and wage war on the Master of Darkness.

With their newfound powers the Amigos help Andy slip into the Master of Darkness's lair. While in there, Andy is captured and thrown into a cell with Whiskey, but manages to escape and free Whiskey. Meanwhile, the Master of Darkness's minions have found the magic rock and bring it to the Master, who destroys it, thus draining Andy and the Amigos' powers. Unarmed once again, Andy can only run from the shadows.

While fleeing, he accidentally falls into a hole and lands on top of the giant monster, who promptly swallows Andy whole. However, he is able to escape by obtaining his gun from the monster's stomach and blasting him in half from within. He then encounters the servant and forces him to help defeat the Master of Darkness and find Whiskey. The servant tells Andy that the only way to defeat the Master of Darkness is to drop the completed magic rock into the dark portal. Andy then searches for the fragments of the rock in order to reform it. He manages to obtain all but one piece, which is laying on the bridge near the portal. While Andy is fighting his way to the bridge, the servant betrays Andy by kicking Whiskey into the portal.

They find themselves in the main area of the Heart of Darkness, where they battle. Andy wins the fight and then hears the sound of a door opening, only to see red eyes approaching. He prepares to strike, but lights come on from Andy's mother, revealing that the eyes are Whiskey, and they are in Andy's tree house...the whole thing was in Andy's imagination. Andy's mother calls them to dinner. After being kissed goodnight by his mother, Andy taunts Whiskey's fear of the dark a bit and then turns the nightlight off, revealing that he has conquered his fear of the dark thanks to his make-believe journey. The scene then shows the Amigos finding the wreckage of Andy's ship, with the servant also there tied up, being harassed, revealing that Andy's adventure was not imaginary. 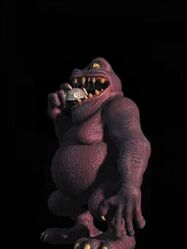 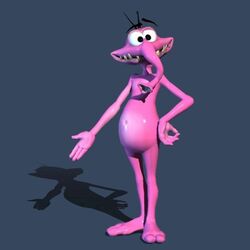 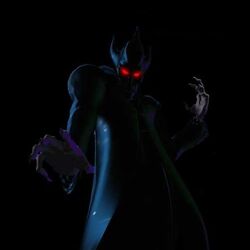 The Master of Darkness
Community content is available under CC-BY-SA unless otherwise noted.
Advertisement