Dathomir is a planet within the namesake Dathomir System, and oen of the many locations in the Star Wars universe. This obscure planet which can found in the Outer Rim Territories located within the Quelii sector, was a remote, neutral world and the home of the Nightsisters.

It was somewhat smaller than the cosmopolitan urban planet Coruscant in size, and had slightly-below-standard gravity, but the planetary day was close to standard, and the planetary year was long, lasting 491 days. Dathomir had 4 moons.

The planet, lit red by its central star, had numerous continents that were overrun with vegetation, forests, and swamplands. Its species included the mighty Rancor and its larger subspecies the Bull Rancor. Other native fauna included the rancor's major prey species, the drebbin and ssurrians. However, several of Dathomir's most important species, notably Humans, had arrived on Dathomir over the millennia as the result of off-world contacts.

Generations prior to the Clone Wars, a small group of Iridonian Zabraks originating from Rattatak, where their ancestors had crashed in a starcruiser, were brought to Dathomir during pirate raids. When the Human Nightsisters discovered that they could interbreed with Zabraks, they isolated them to a small part of the planet where they could draw from them at whim. The creation of the Dathomirian species was the result of hybridization between Human females and male Zabrak of Iridonia. They were near-human species.

Dathomirian females tended to have pale gray or white skin and usually blue or silvery eyes, and tall and thin bodies. Their male counterparts more closely resembled Zabrak, muscular and powerfully-built who sported skin patterns similar to Sith tattoos and cranial horns. Females tended to exhibit a certain athleticism, while males usually possessed powerful strength. All Dathomirian specimens were Force-sensitive, though this was due to the genetic Forceful component of the female Human Nightsisters that helped breed the subspecies. Some females among the Witches of Dathomir were Dathomiri Zabraks with the vestigial horns and characteristics of the Zabrak species.

The Nightsisters, also known as the Dathomir Witches, made their home in the swamps, and wielded magicks fueled by Dathomir's own power. Dathomir was also home to the Nightbrothers, Zabraks who were ruled by the Nightsisters.

Darth Sidious visited Dathomir in 54 BBY and was approached by the Nightsister Kycina, who begged him to take away her infant son from the life of a Nightbrother. Sidious agreed, taking in the Zabrak who would soon become his apprentice, the fearsome Darth Maul.

Asajj Ventress was born on Dathomir but was taken from her mother and sold to a slave lord to protect her clan.

The Nightsisters remained divided into various competing covens until 31 BBY, when Clan Mother Zalem anointed herself "Queen of Dathomir". An ambitious matriarch, Zalem had learned a higher mastery of the Force by capturing a Jedi Knight on Dathomir and forcing him to become her mate but Zalem was killed by her own daughter.

Following Zalem’s failure, a new authority figure arose. The shaman Talzin, who was both Clan Mother and shaman of her coven, succeeded in reuniting the competing clans under her banner. Under Talzin, the Nightsisters entered into a prosperous era. At that time, Mother Talzin decreed that the Sisters under her lead could only mate with Zabrak Nightbrothers. Talzin also established a clear policy of separation, with the Brothers staying aloof from the Sisters.

During the Clone Wars, Count Dooku, was ordered by his Master to eliminate Asajj Ventress because of her growing prowess of the dark side and he obliged. Later during the war, the Nightsisters welcomed back and helped their estranged sister Ventress in her quest for vengeance against Dooku, who had betrayed her. Mother Talzin healed Ventress and sent two of her Sisters to Serenno to kill the Count but failed.

Due to his attackers' use of Jedi lightsabers, Tyranus mistakenly believed that the Jedi had tried to assassinate him. Wishing to protect himself, he sought a new apprentice to replace Ventress. He traveled to Dathomir to meet with Talzin who promised him a new warrior. The Nightbrother Savage Opress was presented to the Count by Talzin in person. Around this time, they also discussed using her Nightsisters against the Jedi in the Separatist war effort, but Talzin declined choosing to stay neutral.

Savage later returned to Dathomir breaking away from Dooku and Ventress where Talzin told him to search for his long forgotten brother in the Outer Rim. Savage vowed to return more powerful than ever. Around 21 BBY, Asajj Ventress returned to Dathomir and abandoned her Sith ways and became a Nightsister.

Having harbored a grudge against Ventress and Talzin since their attempt on his life, Dooku monitored his former apprentice's movements and learned of her return to Dathomir. Dooku summoned General Grievous rival of Ventress during her service to the Confederacy, to his palace on Serenno and ordered him to exterminate the Nightsister witches before they continued to plot against the Sith Lord. Dooku intended for Grievous's confrontation with Ventress to be yet another test of his general's abilities. The resulting battle ended with a CIS victory that essentially amounted to genocide, Ventress and Talzin being the only survivors. This assault led to the extermination of almost every Dathomirian Nightsister.

Alone in the forest, Ventress experienced a vision of Talzin and learned of their clan's slaughter, while also being told of a new destiny by the Clan Mother. Once again forced into exile, Ventress left to pursue her newly foretold destiny, wandering through the Outer Rim Territories.

Talzin, meanwhile, remained on-world, aiding Savage Opress from afar in his search for his long-lost brother, the Sith Lord Darth Maul. Despite the decimation of her clan, she believed that the Nightsisters would survive, as had been the case throughout their history. When Grievous and the Separatist Droid Army departed from Dathomir, they left behind the remains of their droid forces, with the wreckage of Separatist troops and vehicles scattered amidst the corpses of the Nightsisters. It was in that state that Opress found the derelict Nightsister fortress when he brought Maul to be healed by Talzin and her magicks. Her work complete, she vanished into green smoke and left the Nightbrothers to seek out their vengeance.

After the rise of the Galactic Empire, Maul fled to Dathomir and took up residence in the Nightsisters' abandoned lair. He ran the Crimson Dawn crime syndicate from Dathomir, and lived there until shortly before his death in 2 BBY.

The Dathomirians who were Nightsisters were a gynarchial society and a tribal people who practiced dark side magic and black voodoo. The people also worshipped the Fanged God and the Winged Goddess as their main deities. They enslaved many immigrated Zabrak from Iridonia and Rattatak, usually males, to do their bidding. Many of these species traveled by piloting a Nightsister speeder. Almost all known Dathomirians were known to use the power of the dark side of the Force, as all known members were Force-sensitive.

Dathomirians who were Dathomiri Witches wore facial tattoos that declared their adulthood. 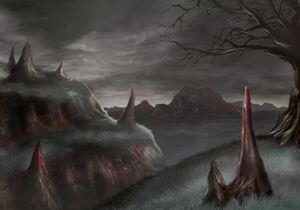 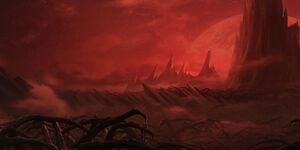 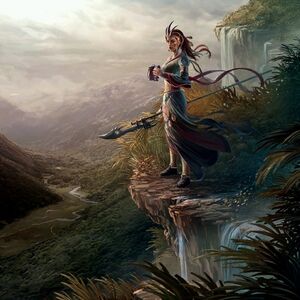 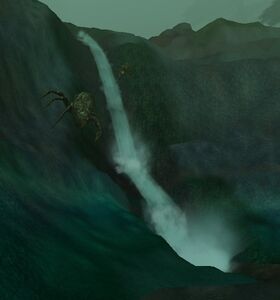 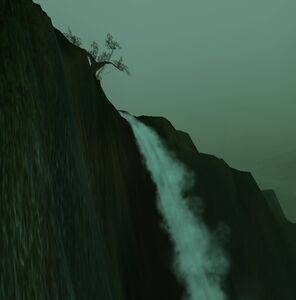 A view of the Misty Falls. 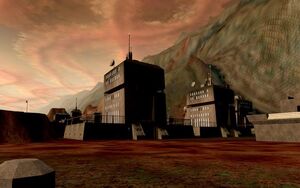 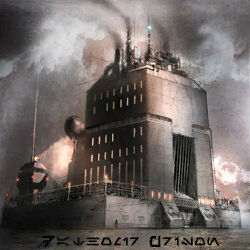 A painting of the Dathomir Imperial Prison. 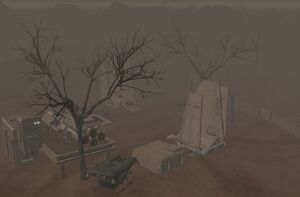 A Quarantine Zone on planet Dathomir. 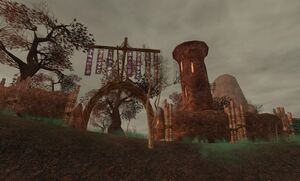 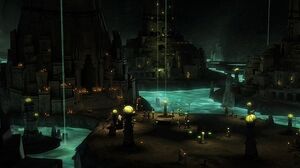 Retrieved from "https://evil.fandom.com/wiki/Dathomir?oldid=116098"
Community content is available under CC-BY-SA unless otherwise noted.