The Day of Judgement (also spelled "Day of Judgment")

The Antichrist
The False Prophet

The Day of Judgement (sometimes spelled the "Day of Judgment), commonly known as Judgment Day (sometimes spelled "Judgement Day"), is the final act of destruction in the believe systems of the monotheistic belief system - it follows Armageddon and the End Times and although it is believed to be a necessary part of humanity's ultimate salvation it does require God's final acts of destruction upon a world that has underwent the biblical Apocalypse.

During the Day of Judgement, all souls are to be risen and stand before God to face His supreme judgement, those who fail God's judgement are forever cast out of " The World To Come" - in many texts God casts them into the Lake of Fire but in the bible a second fate is described in which souls (presumably judged unfit for paradise but too pure for Hell) are cast into a wasteland and forced to live as animals while the souls that pass are granted eternal peace in God's Kingdom (this is more like to happen during the Second Coming, when Good is believed to reign for several years before Evil once again rises, at which point God intervenes personally and His judgement is absolute, with the wasteland becoming part of the Lake of Fire).

During the Final Judgement God performs His acts of destruction so that the universe can ultimately heal and the concept of theological evil removed - this does not make the idea any less controversial and some deliberately use the concept of the Final Judgement to paint a picture of a wrathful or (in some extreme case) a downright malevolent God in Maltheistic idea. 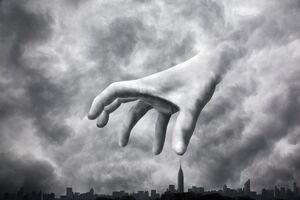 The Day of Judgement
Add a photo to this gallery

Retrieved from "https://evil.fandom.com/wiki/Day_of_Judgement?oldid=84120"
Community content is available under CC-BY-SA unless otherwise noted.