The Evil Wiki
Register
Don't have an account?
Sign In
Advertisement
in: War-Machines, Cataclysm, Evil Lairs,
and 14 more

Destroy entire planets in order to cause the inhabitants of the Galaxy to fear the Galactic Empire.

The Death Star I, also known as the DS-1 Orbital Battle Station, the Imperial Space Station, the Ultimate Weapon and most commonly the Death Star, is an iconic moon-sized military space-station that is the Galactic Empire's ultimate weapon of doom, capable of destroying planets with a single shot of it's superlaser. The Death Star was to be an instrument of terror, meant to cow treasonous worlds with the threat of annihilation. It had a formidable array of turbo-lasers and tractor beam projectors, giving it the firepower of greater than half the Imperial starfleet. Within its cavernous interior were legions of Imperial troops and fightercraft, as well as all manner of detention blocks and interrogation cells.

In a brutal display of the Death Star's power, Grand Moff Tarkin, one the Empire's preeminent governors, targeted its prime weapon at the peaceful world of Alderaan. Princess Leia Organa, an Imperial captive at the time, was forced to watch as the searing laser blast split apart her beloved homeworld, turning the planet and its populace into orbital ash and debris.

Count Dooku and his servants developed the plans to the Death Star known as the "Ultimate Weapon". He later gave them to his master.

In this Star Wars anthology film, it is revealed that part of the Death Star was reluctantly designed by the scientist Galen Erso, who was kidnapped by Director Orson Krennic and his squad of Death Troopers at the beginning of the film, after his wife Lyra was killed and his daughter Jyn went into hiding. Years later, Jyn Erso is found and freed from an Imperial prisoner labor camp in Wobani by the Rebel Alliance, who want her because of her father's work in the Death Star. When Jyn, K-2SO and Cassian Andor arrive in the holy moon of Jedha, where the Empire has been taking massive quantities of Kyber Crystals to empower its weapon, and meet Baze Malbus and Chirrut Imwe, they are taken to Saw Gerrera and his partisans, where they meet Bodhi Rook as well. Saw shows Jyn an hologram of her father where he explains he hid a weakness in the Death Star so it could be exploited and destroyed by the Rebels. At that moment, the Death Star is used at low power on the holy city of Jedha, destroying it and killing Saw while Jyn and the other Rebels escape. Grand Moff Tarkin assumes control over the Death Star while Krennic investigates security breaches in the design project. Eventually, Jyn, Cassian and many other Rebels travel to Scarif where they successfully steal the plans of the superweapon and give them to the Alliance, but the Death Star appears and Tarkin has it destroy the Imperial base, killing Krennic, Jyn, Cassian and everyone present at the moment. The plans are then delibered to the Tantive IV, the ship where Princess Leia is hiding, by some other rebels who are slaughtered by Darth Vader. The ship successfully takes the plans and flies away with them, triggering the events of A New Hope.

20 years later after episode 3, the Death Star (also called Death Star I) is completely built and fully operable. It is used to destroy Princess Leia's home planet of Alderaan, and later in the movie is destroyed by Luke Skywalker, who manages to fire a proton torpedo into the Death Star's exhaust port, which caused the whole station to explode, almost as if it had a self-destruct button.

The Death Star's superlaser was revealed to be operational before the construction of the station was completed, surprising the Alliance attackers during the Battle of Endor. This was Emperor Palpatine's plan all along, and it nearly led to the loss of the Rebels. That is until the Emperor was defeated and ultimately killed by Darth Vader after he tried to lure his son Luke Skywalker into the dark side while the Alliance ground forces on the forest moon of Endor managed to deactivate the energy shield surrounding the battle station, and the Rebel fleet proceeded to destroy the station from within, signifying the beginning of the downfall of the Empire. 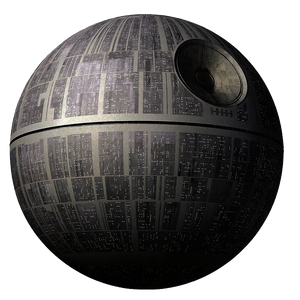 Emperor Palpatine and Darth Vader watch the construction of the "Ultimate Weapon" (now revealed to be the Death Star). 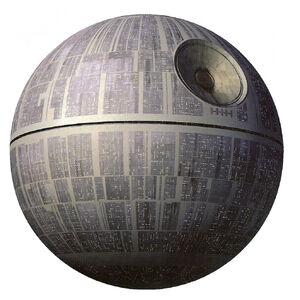 The Death Star destroyed by Luke Skywalker and Alderaan being avenged.