The Evil Wiki
Register
Don't have an account?
Sign In
Advertisement
in: Villainous Tools and Other Items, Paranormal, Wrong Hands Tools,
and 3 more

The Deep Power Stones were a pair of legendary jewels capable of producing tremendous energy. Combined in one way they granted extraordinary power, whereas combined another way they could cause mass destruction.

They were hidden by the royal family known as the House of Acorn, knowing that the Deep Power Stones would fall into the wrong hands and the consequences could be disastrous.

Eventually, the mad genius Dr. Robotnik managed to translate the scrolls that told where the stones were. The Freedom Fighters set out to stop Robotnik from getting them, but he nevertheless successfully obtained the first stone. However, thanks to a plan by Tails, they were able to prevent him from finding the second stone by finding it first and then convincing Robotnik that they had destroyed it. In fact, they had destroyed a fake, and brought the real stone with them back to Knothole.

Later, when all seemed hopeless, Sonic stole Robotnik's stone. He and Sally then called upon the energy imbued in the stones to destroy the Doomsday Project. Originally, they intended to unleash the power of destruction contained in the 2 stones, but later combined them in the other formation to grant them supernatural abilities. It was revealed that physical contact between users of the stones produced further energy, as demonstrated by first a high-five, and later a kiss, between Sonic and Sally.

The Deep Power Stones are also known to have the same energy found in the Power Rings, but greatly amplified, meaning they are 10,000 times more powerful. 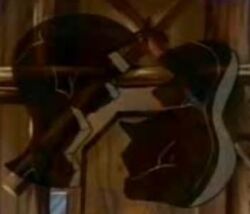