The Evil Wiki
Register
Don't have an account?
Sign In
Advertisement
in: Rituals, Magic, Villainous Tools and Other Items,
and 5 more

To performed magically in order to summon the Meta-God and/or other supernatural entities.

The Demon's Gate Invocation is a magical ceremony that was designed to invoke and summon the Meta-God and/or other supernatural entities to the Earth.

This ritual attempted by the Taoist warlock Dehuai and thwarted by Ben Hyuga and Li Zhuzhen 15 years before the start of the first Shadow Hearts game.

Desperate to protect Shanghai from the Japanese, Dehuai planned to summon a god to annihilate them and neturalize any future threats. Dehuai mentions that powerful earth spirits are summoned by the Demon's Gate Invocation when he was telling Yuri and his friends about his real plans.

The ritual required the 4 guardian gods of the compass (the Black Tortoise, the Red Phoenix, the Blue Dragon and the White Tiger) to be blocked off and prevent their interference.

He would have accomplished his goal, if not for the efforts of Ben Hyuga and Zhuzhen. Having lost most of the left side of his body in his battle, he fled, though not before successfully managing to summon the unknown god.

However, before it could do any damage, Ben attempted to fuse with the beast. Unfortunately, Zhuzhen was forced to kill his comrade after Ben could not fully contain the beast.

This ritual was the one that Zhuzhen thought Dehuai was attempting again during the events of Shadow Hearts, only to find out that Dehuai before the arrival of the false Roger Bacon, was actually using a similar ritual; the Reverse Demon's Gate Invocation, and with it, the power to call forth the Seraphic Radiance. 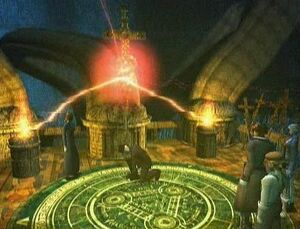 The magic of the Demon's Gate Invocation.
Community content is available under CC-BY-SA unless otherwise noted.
Advertisement