Demon Blood is a demonic bodily fluid which is a villainous tool found in the Supernatural universe, where it empowers vessels. The Demon Blood is extremely powerful, and is one of the essences of containing Lucifer. The Demon Blood can be obtained by killing a human possessed by a demon, and then draining their blood.

Demon Blood is very strong, and gives the host incredible powers, such as white light in the case of Sam Winchester. When infected by Demon Blood, Sam's powers were equivalent, if not the same, as that of Lilith's.

So far in the series, Demon Blood was most prominent in seasons 4-5, where Lucifer had to make his vessel drink vast amounts. When Famine was strong, he casually sent sacrificial demons as bait, because he knew Sam was addicted to Demon Blood. Sam was so thirsty he knew he would be a danger to others, so he got Castiel to chain him up. However, when two demons broke in, Sam's urges became so strong, he killed both the demons.

Ruby is the one behind Sam's addiction, because she wanted him to be Lucifer's vessel and she knew he needed to strengthen himself to become powerful enough to contain him. A side affect of not drinking Demon Blood to empower oneself is shown with the case of Nick, Lucifer's first vessel, who melted internally and combusted physically as a result of having the Devil in him.

Sam suffered terrible urges for Demon Blood when with Ruby and drank tubs of the liquid. However, during season 5, God Himself cured Sam when He teleported the brothers out of Saint Mary's church from Lucifer. God was believed to have cured Sam's addiction for good, however in season 5's later episodes, Sam got an affliction with Famine's presence; but Famine's defeat saved him. 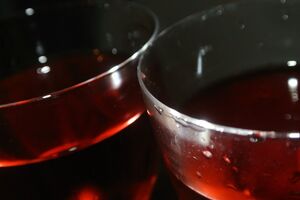 Demon Blood in 2 glass cups.
Add a photo to this gallery

Retrieved from "https://evil.fandom.com/wiki/Demon_Blood_(Supernatural)?oldid=47964"
Community content is available under CC-BY-SA unless otherwise noted.