Diagon's World, sometimes called "Diagon's Dimension", is a parallel dimension in which Diagon and the Lucubra live. It is seen by Ben's cousin Gwen in the episode "A Knight to Remember" of the animated series Ben 10: Ultimate Alien, when she uses her mana to peer through reality and see this perfect alien dimension from which the Esoterica zealots who worshipped Diagon are jumping in and out of.

There are many structures and staircases in the dimension, which the Esoterica's fellow Diagon worshippers, Flame Keepers' Circle, also climbs on to create the illusion that they are walking on thin air.

In the 2-part episode "The Ultimate Enemy", the entire world of Diagon's home and origin revealed as a magnificent planet with cities and pyramid-like structures that somehow resembles those of Earth's Aztec and Hindu cultures.

This extradimensional realm is forever closed off and sealed away after Ben Tennyson's ultimate battle with both Diagon and Vilgax. 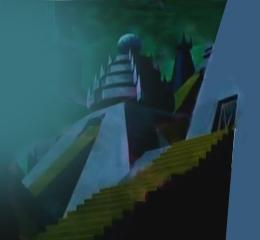 Diagon's Dimension
Add a photo to this gallery
Retrieved from "https://evil.fandom.com/wiki/Diagon%27s_World?oldid=64178"
Community content is available under CC-BY-SA unless otherwise noted.