The Evil Wiki
Register
Don't have an account?
Sign In
Advertisement
in: Article stubs, Mature, Magic, Villainous Tools and Other Items

The Diamond of Pantheos is an evil diamond-shaped stone relic and one of the many objects in the South Park universe. It is made up of 2 brown triangles with separate colored lines and similar dark-brown serpent symbols and yet 2 humanoid symbolic figures between the snakes: the Triangle of Zinthar and the Triangle of Krewluck. When both triangles are need to form the Diamond, it unleashes the strange magical power to transform anybody into a giant mechanical and monstrous version of themselves. Disgruntled famed singer Barbra Streisand, who wanted to be the most famous person in the world above all else, used the Diamond of Pantheos to transform herself into a giant mechanical monster version of herself known as to destroy South Park and the world. It first appeared in the Season 1 episode "Mecha-Streisand" and reappeared in the Season 14 episode "200".

The lines of the Triangle of Kreluck is light blue, in contrast to the Triangle of Zinthar's yellow color of its lines. It has a dark brown seemingly graceful woman figure between the snakes.

Barbra Streisand had already found this first half of the Diamond of Pantheos years ago, and now it has been safely kept at her multi-million dollar mansion somewhere within the Rockies Mountains of Colorado.

The lines of the Triangle of Zinthar is yellow, in contrast to the Triangle of Krewluck's light-blue color of its lines. It has a dark brown seemingly war-like man figure between the snakes.

The artifact was uncovered by the 4 boys, Kyle Brofloski, Stan Marsh, Kenny McCormick, and Eric Cartman, while the four were on a school archeology field trip alongside rest of the other children including from South Park Elementary. Originally thought to be an arrowhead from ancient times left behind by a local tribe, Pip was the first to find it and pick it up. Cartman steals it from Pip out of greed, then he carelessly threw on the ground after he kicked Pip in the classic harsh yet fun game of Roshambo/Ro-Sham-Bo, and then later immediately avariciously claimed ownership of it from Kyle just to be famous for the discovery. 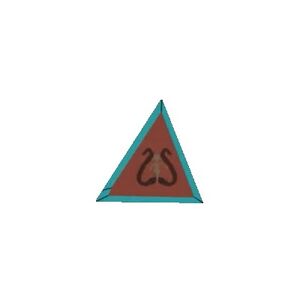 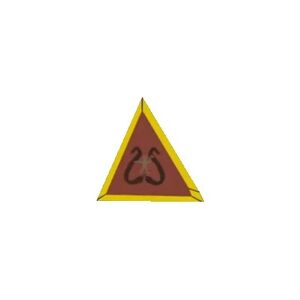