The Evil Wiki
Register
Don't have an account?
Sign In
Advertisement
in: Villainous Tools and Other Items, Technology, Wrong Hands Tools, Folkloric Villainy

Die Glocke (German for "'The Bell'") is a legendary device attributed to the Nazis during the endstages of World War II and has become infamous amongst fringe scientists and conspiracy theorists who believed it was a type of alien weapon either devised by Nazi scientists or by aliens friendly to the Third Reich.

Due to the fantastical nature of the Die Glocke, which is often said to be a time-machine or dimensional gateway akin to a stargate, it is not taken very seriously by mainstream historians but some do hold it as a top secret weapon that may even of been used to allow some Nazis to evade justice for crimes against humanity.

The device was also discussed in the controversial "Ancient Aliens" television series on History Channel, which suggested it was used at least once and that some Nazis may still exist in other time-lines and/or other worlds.

Until evidence can be proven either way, however, Die Glocke remains (for the most part) a fictional concept. 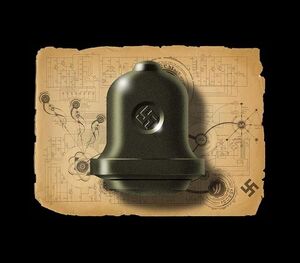