The Evil Wiki
Register
Don't have an account?
Sign In
Advertisement
in: Formulae, Weapons, Villainous Tools and Other Items,
and 5 more

Destroy Toontown for Judge Doom to build a freeway.

The Dip is a ghastly green chemical invention that is used by Judge Doom in the 1988 fantasy/comedy movie Who Framed Roger Rabbit. It dissolves anything that is a cartoon.

The Dip was used by Judge Doom to "execute" any toon that he felt broke the law. He was intending to use to Dip on Roger Rabbit for the murder of Marvin Acme. However, his true intention was to use the Dip to wipe out all toons so he could create a freeway, hotels, retail stores and gas stations. Ironically, Judge Doom ended up getting killed by the very weapon he used to end all toon life. After Doom died, Eddie wiped out the Dip with water.

Judge Doom planned to use the Dip to destroy Toontown in order to build a freeway over the entire area. To that end, he has built a huge vehicle that can literally erase Toontown from existence via the use of high-pressured cannons filled with Dip. Doom orders the Toon Patrol to tie up both Roger and Jessica to have them sprayed with Dip, but Eddie foils this by making the weasels literally laugh themselves to death with crazy antics, much to Doom's strong annoyance. Deciding to take matters in his own hands, Doom fights Eddie, but ends up squashed flat by a steamroller.

However, Doom survives being squashed, revealing himself to be a toon using fake props to hide his unknown true appearance. After inflating himself again with an oxygen tank, he reveals himself, much to Eddie's horror, as the same toon who murdered Eddie's brother, Teddy Valiant, thus triggering his hatred towards toons and explaining how Doom managed to buy the judicial election and the trolley car company in the first place.

His voice grew higher until it reaches a horrifyingly high pitch and his eyes turn to daggers, showing Doom's intent that he is now out to kill him as well.

With an evil grin, Doom sprouts a cartoon anvil and buzz-saw to kill Eddie, but the latter uses a toon glove-loaded hammer to open the vehicle's Dip vat, leaving Doom doused in his own concoction. As he begins to melt, Doom shows more of his "toony" nature as he cannot resist doing a direct spoof of the Wicked Witch of the West's death throes (screaming in pain that he is melting) in The Wizard of Oz.

He finally melts in a flood of Dip and fatally dissolves, leaving behind only his clothes, fake teeth, and rubber mask. All the remaining Dip that he left behind was later dissolved by Eddie. 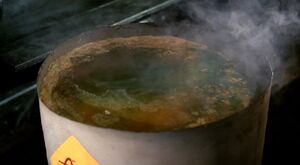