To celebrate the reign of Doctor Doom over the European country of Latveria.

Doom's Day, also called "Doomsday" is a "holiday" in the Eastern European country of Latveria that commemorates and celebrates the reign of the Fantastic Four's most dangerous archenemy Doctor Doom, and an event in the Marvel Comics universe.

It is an eclectic national holiday that is celebrated whenever the ruler of Latveria, Doctor Victor Von Doom, declares it. Thus, the exact date is variable.

Apparently, the Latverian people across the country enjoy this day despite the fact that Doom has ordered them to.

The Doom's Day-like final battle between the Fantastic 4 and Doctor Doom in the 2005 film Fantastic Four. 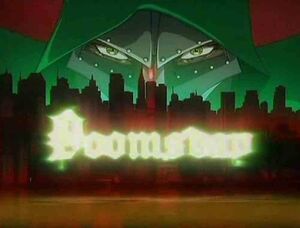 Doomsday
Add a photo to this gallery

Retrieved from "https://evil.fandom.com/wiki/Doom%27s_Day?oldid=63709"
Community content is available under CC-BY-SA unless otherwise noted.