Dr. Robotnik's Fortress is a fortified lair belonged to the dictatorial genius Dr. Ivo Robotnik and a location in Adventures of Sonic the Hedgehog. It is his central base of operations for his plots to take over Mobius and destroy his heroic archenemy Sonic the Hedgehog.

Dr. Robotnik's Fortress is an observatory-like stronghold sitting on the top of a mountain, and sporting an over-sized golden statue of Doctor Robotnik doing his pose with his arm raising forward.

Damaged and destroyed on many occasions, the base has little defenses except for that of Scratch, Grounder, and Coconuts. The interior of the fortress has differed from episode to episode. The fortress appears much larger on the inside. It has many rooms that include science laboratories, underground factories, workshops, a control room inside the golden statue of Dr. Robotnik, a lounge near the top of the fortress, and probably a kitchen and Robotnik's sleeping quarters. Although the fortress holds a massive prison block, the base is more of a home to Robotnik than an actual military base. When not having the 6-S and/or Coconuts on a mission, they are usually the ones cleaning the base. The fortress is also Sonic's usual first and last stop in preventing Robotnik's plans of taking over Mobius. It is revealed in the episode "Zoobotnik", that the golden statue of Dr. Robotnik has a flippable top, so it can become a watch tower.

Robotnik's Fortress is destroyed in the episode "Robo-Ninjas", and is not seen again in the next episode "Sonically Ever After" or in the Christmas special "Sonic Christmas Blast" (in which Robotnik had a different base, located in Robotropolis), leading to the conclusion that after the base was destroyed, it was destroyed for good. 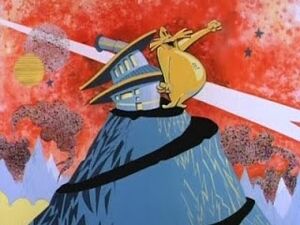 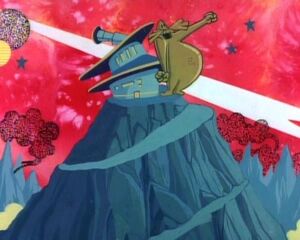 Retrieved from "https://evil.fandom.com/wiki/Dr._Robotnik%27s_Fortress?oldid=65604"
Community content is available under CC-BY-SA unless otherwise noted.