The American Radiator Building within Manhatten in New York, U.S.A.

This penthouse is located on top of the historical American Radiator Building, with its hall decorated with tacky paintings depicting its owner along with trophies for his achievements that made other decorations such as an antique katana blade and a set of samurai armor in the hall looked pale in comparison.

The Drake Stone acquired the ownership of this penthouse sometime during or after his rise to fame as a famed stage magician.

By the time Maxim Horvath visited him, he has decorated his residence in ostentatious manner, further adding the former Merlinean's distate in addition of him wasting his talents for personal gain instead of fighting for the Morganians' "greater" cause.

The penthouse later acts as Horvath's latest base of operations which he shared with Drake as well as where he schemed the preparation of The Rising for his mistress Morgana le Fay. This residence soon acts as the silent witness of its owner and (later) Abigail Williams' murder by Horvath via usage of the Parasite Spell and the subsequent theft of their catalysts to increase his own powers and upgrading his Cane. Shortly afterwards, as Balthazar Blake struggled to free himself from magically booby-trapped carpet, Horvath and Dave Stutler conducted an uneasy hostage exchange where the former demanded the latter's Dragon Ring if he wanted him to spare Becky Barnes.

It is unknown what happened to the penthouse after Drake's death and Horvath's disappearance. 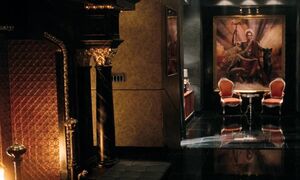 Drake Stone's Loft
Add a photo to this gallery
Retrieved from "https://evil.fandom.com/wiki/Drake_Stone%27s_Penthouse?oldid=121384"
Community content is available under CC-BY-SA unless otherwise noted.