The Dreadfort is a castle in the North. It is home to House Bolton, one of the antagonistic factions of A Song of Fire and Ice/A Game of Thrones.

The Dreadfort is an eerie and ill-omened castle with spiked merlons doting it's towers and walls. Inside, the castle is dimly lit, and the few torches and candles are held by skeletal hands jutting the walls. The castle has several torture chambers where prisoners are slowly torture either for information or sheer pleasure. Once a prisoner is dead or useless, they are skinned and kept as trophies or warnings. There are also kennels containing Bolton hunting dogs who are rarely feed in order to make them fierce. The dogs are trained to hunt and kill wolves and humans in addition to food game. Dead Boltons are buried beneath the castle.

The Dreadfort was built in the Age of Heroes by the first Red King of House Bolton. Their Kingdom spread from the Last River to the White Knife and as far south as Sheepshead Hills. Bolton lands were plagued by seemingly neverending rebellions from unsatisfied subjects and invasions from rival houses and Ironborn. This world of violence forged House Bolton into a ruthless house that used fear to intimedate their subjects and terrify their enemies. The greatest enemy of House Bolton was House Stark of Winterfell and the two houses waged countless wars against eachother. In the end, House Stark was victorious and House Bolton bend the knee.

When Aegon the Conquoror invaded the North, King Torren Stark knew he could not defeat Aegon's dragons and to save himself and people, bend the knee to Aegon. Torren was spared and named Warden of the North, and his vassals would still keep their lands, including House Bolton.

Durring the War of the Five Kings, where House Stark tried to gain independence from the Iron Throne, House Bolton betrayed the Starks and were rewarded with Lordship over the North and their rivals castle Winterfell. In the books, House Bolton is still active and is about to face King Stannis in battle, while in the show, House Stark has defeated them and killed Lord Ramsay Bolton, the last known Bolton and thus ending the Bolton line. The status of the Dreadfort is never revealed. 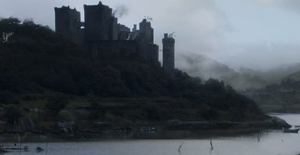 Dreadfort
Add a photo to this gallery
Retrieved from "https://evil.fandom.com/wiki/Dreadfort?oldid=85738"
Community content is available under CC-BY-SA unless otherwise noted.