The Dungeons in the broadest sense of the word, are prisons found mainly in medieval castles - however the word has become associated with evil and villainy due to the harsh conditions found in many of these prisons: which are considered inhuman by today's standard (the association with torture would later be attributed during the Renaissance)

Nevertheless, Dungeons are now fixed in the popular mindset as a place of cruelty and is often used by nefarious monarchs, sadistic torturers ,or cruel overlords to imprison others (often without good cause).

Common sights in fictional Dungeons are prisoners being chained to walls, skeletons and the display of instruments of torture - in reality Dungeons were usually barren rooms but were arguably just as cruel: especially a type of Dungeons known as a Oubliettes - which was accessible only from a hatch in a high ceiling.

Dungeons in fiction are also frequently haunted by evil spirits, monsters and other fantastical creatures - often taking on aspects more associated with mazes and labyrinths (this is a popular setting in roleplaying games - such as (fittingly enough) Dungeons & Dragons). 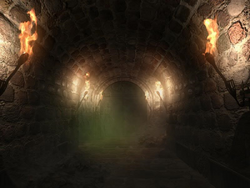 Add a photo to this gallery
Retrieved from "https://evil.fandom.com/wiki/Dungeons?oldid=20352"
Community content is available under CC-BY-SA unless otherwise noted.