The Evil Wiki
Register
Don't have an account?
Sign In
Advertisement
in: Villainous Tools and Other Items, Technology, Magic, Villainous Symbolism

The Egg Network, or Eggnet, is a global communications network conceived from the genius mind of Dr. Ivo "Eggman" Robotnik used by the Eggman Empire to keep in touch with its various territories across Mobius.

The day after the destruction of the third Metal Sonic and Metal Scourge, Snively Robotnik used the Egg Network to perform a routine maintenance check on the Sub-Bosses. While doing so, he encountered a particular one named Regina who he became romantically attached to.

During the Chaotix (Vector, Espio, and Charmy) and the Mercian Freedom Fighters (Bow Sparrow, Thorn the Lop, Munch Rat, Alan Quail, and Friar Buck) invasion into the Snottingham Castle in Mercia, Espio had hacked the Eggnet to find where the Chaotix's friends, Mighty the Armadillo and Ray the Flying Squirrel, and found out that Mighty's sister is located at Sand Blast City. 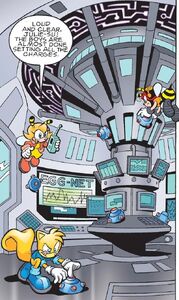 Three of the Chaotix members at the Egg Network tower.
Community content is available under CC-BY-SA unless otherwise noted.
Advertisement