El Dorado is a large golden sarcophagus containing a mummy that carries a dangerous virus from Uncharted: Drake's Fortune.

The origins of El Dorado are unknown, but it ended up hidden in a temple in the Amazon jungle and it came to be believed that it was actually a city of gold. Around 400 years in the past, El Dorado was found by Spanish explorers and brought it to an uncharted island colony named Versteckte Insel in the middle of the Pacific Ocean, placing it in a large underground maze. However the Spaniards opened El Dorado, becoming infecting by the virus within and the colony destroyed itself.

Francis Drake, who had been tracking El Dorado, learned of what the artifact could do and set out to stop its curse from reaching the rest of the world. He destroyed all the ships on the colony, before Drake headed to the treasure vault that contained El Dorado, where he was hunted down and killed by the infected Spaniards. Centuries of inbreeding amongst the infected colonists would result in the Descendants, who would come to serve as the guardians of El Dorado.

Around World War II, the Nazis began hunting for El Dorado and found it, moving it to a series of catacombs underneath the monastery of Versteckte Insel. They experimented with the virus the sarcophagus contained, infecting one of their soldiers, but they too lost control of it and were slaughtered. Many years later, Nathan Drake and Victor "Sully" Sullivan began hunting for El Dorado, as did Gabriel Roman and Atoq Navarro. Roman and Navarro managed to find it, capturing Nate and Sully, and Navarro encouraged Roman to open it. He did so, but was immediately infected and attacked Navarro, who quickly shot him down. Navarro prepared to have El Dorado taken away by helicopter and managed to escape with it as the Descendants attacked. However Nate pursued him and made his helicopter crash into a boat Navarro had waiting.

The virus El Dorado contains travels through the air and when it infects a victim, it makes them extremely violent, turning their eyes pitch black and making them rabid. The virus' effect grows more drastic over time, as seen from the Descendants. 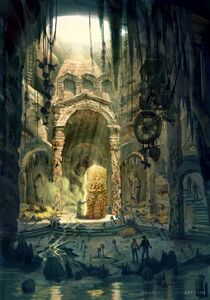 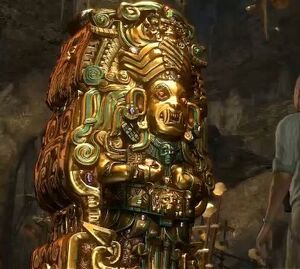 Retrieved from "https://evil.fandom.com/wiki/El_Dorado?oldid=96285"
Community content is available under CC-BY-SA unless otherwise noted.