The Evil Wiki
Register
Don't have an account?
Sign In
Advertisement
in: Evil Lairs, Evil Realms, Prisons,
and 4 more

The "Village" (referred to only by its real name "El Pueblo" as seen in road signs) is a local community located in a small, isolated rural area of Spain near a small lake not far away from a vast castle owned by the Salazar family. This town, once a peaceful hamlet, is infested with Ganados and was placed under the control of the religious cult known as Los Iluminados.

The village features homesteads, a farm compound, a church with a cemetery, and a tall bell tower within the community itself. There appear to be several fortified Ganados encampments located near the village while an underground bunker complex has also been occupied and used to store weapons and equipment. Most villagers live in the village, although a few villagers tend to live further away from the main, central area of town. For example, The first house in the game that the first Ganadois in seems to be closer to the border of the village, requiring him to take a path to the village and the outlying areas. An unseen villager also lives in a house next to the lake, when Leon kills Del Lago he passes out in this persons house. There is also an abandoned cabin across the bridge near the farm where Leon, Ashley Graham and Luis Sera take refuge in during a villager mob attack.

The western pathway to the village begins just after a river crossing against don Jose's isolated premises. It goes downwards into a small valleyside where another river runs through on a dissimilar path. There are two sheds along this route, one of which was where a local villager was killed and left hanging inside. This area was booby-trapped with tipmines and bear traps.

The southern path leading away from the village leads to the homestead of Bitores Mendez, the village chief. An exit leading out of his bedroom in the rear leads to an underground corridor at the bottom of a well. The corridor eventually opens out in another valley, which was being used as a prisoner compound for Leon and Luis.

This easterly path is taken by traversing an underground passage from a small building in the village centre. It surfaces in the main "Church" and its cemetery, where a short walk uphill and past the church goes much further. A walkway against a cliffhedge overlooking a large lake leads travellers easterly towards a flat, rocky plain with high wooden fencing blocking off the drop down the cliff. A mine against the upper-cliff was used for hiding away an "El Gigante" until its release was ordered. After this area is a shallow marshland with a raised, wooden walkway going down the rest of the area. After this is the shoreline of a smaller lake that feeds the larger lake below. Going south via the lake and down a cliffedge, a complicated machine for changing the distribution of the river water can be used to reveal an underground passage through the cliffs. This passage leads to another, underground lake where a boat can be taken back to where El Gigante is released.

Years ago before 2004, El Pueblo housed many peaceful citizens who often carried out farming tasks in peace. Although, the Los Ilumanidos (a religious cult group which worshipped Las Plagas) crushed the peace and planned to release Las Plagas upon the Villagers to turn them into their savage slaves. The First Castellan of the Salazar Family took away the Ilumanido's power and rights, and sealed off the parasites within his castle. When Ramon Salazar became the Eighth Castellan, he became a loyal follower to the Los Ilumanidos and gave the power and rights back to the cult, as well as allowing the group's leader, Osmund Saddler, have the Plaga dug up and implanted into people. Saddler had Las Plagas too but was injected with the "Dominant Species Plaga", allowing him to control Las Plagas alongside his top underlines: Ramon Salazar and El Pueblo's Chief, Bitores Mendez.

A Church was built in the Village, a sign to show they were followers of the cult as Ilumanidos Insignias were put in the Church and even around the Village. In the lake nearby the Church, an infected Salamander named "Del Lago" was placed their and known as the master of the lake, as well as a guard for the lake in order to prevent any intruders from crossing it. Even known infected by the parasites, Mendez still ruled the Village and the locals were ordered to kill anyone who infiltrates El Pueblo.

During 2004, U.S. Government Agent Leon S. Kennedy infiltrated the Village and eliminated the attacking locals who attempted to kill him. Leon managed to take Del Lago down and resuce Ashley Graham (the captured U.S. President's daughter) from the Church and planned to return to the United States. The locals were then instructed by Mendez to kill Leon and recapture Ashley to carry out Saddler's plans for world domination. In many attempts to become successful, Leon managed to kill Mendez in combat and then escaped the Village with Ashley. A large number of pursuing Villagers began to pursue them, but the two closed the draw bridge at the Salazar Family's Castle. 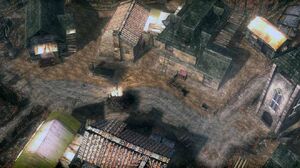 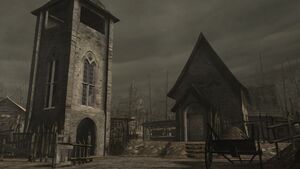 A local church found in the village of El Pueblo belongs to the Los Iluminados.