To aid Ember McLain in her quest control the world.

Ember's Guitar is a powerful technomagic musical instrument and the main weapon used by the evil ghost musician Ember McLain to control humans and an object featured in the supernatural animated show Danny Phantom.

This electric guitar seems to be source of Ember's power. She can use it control humans to her bidding. It can also be used to attack her enemies and cast love spells. Somehow her guitar can increase a certain power to spread across a city as she raised the guitar volume to increase Kitty's kiss with sound waves, causing all the men in Danny Fenton's hometown of Amity Park to disappear.

Even if the guitar is broken, it can be fixed as it was been broken once, but reappeared with Ember.

Ember's guitar has a flame-shaped body and top with a long neck. There are 2 decorative fireballs on the body along with several knobs which can be set to different settings to use different powers the guitar provides.

Ember's guitar, has different icons in each close up, each icon represents the special abilities Ember can use of which knob it points to: 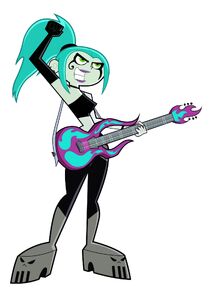 Ember's Guitar
Add a photo to this gallery
Retrieved from "https://evil.fandom.com/wiki/Ember%27s_Guitar?oldid=63345"
Community content is available under CC-BY-SA unless otherwise noted.