The Evil Wiki
Register
Don't have an account?
Sign In
Advertisement
in: Evil Realms, Magic, Oppression,
and 7 more

Empire of the Night

The Emperor continues this treachery with using a decadent abandoned ship traverse in other dimensions in search of living creatures who would give up their free will for anything their hearts desire, and once they do, he transforms them into doll-like puppets and have them forever trapped in his world.

The Emperor of the Night during his dark trek, came across a man named Puppetino and uses him to run a traveling carnival as the front for the Empire and lure more people into his dark realm.

Rise and Fall of the Empire of the Night

Lieutenant Grumblebee finds a large mysterious ship on a riverbank. He observes Puppetino—the chief henchman of the Emperor of the Night—remarking that the area is the perfect place to open ground. Stakes and ropes fly from the ship, and a circus tent forms. Grumblebee leaves the area.

A year later, the young boy Pinocchio after he traded his father's jewelled box for a fake ruby gem given to him by two con-artists Scalawag and Igor, looks for work at the carnival and is entranced by a blonde marionette named Twinkle. Puppetino uses Twinkle to lure Pinocchio into joining the carnival. Puppetino spins an organ grinder and Pinocchio begins dancing against his will as he is transformed back into a puppet. Puppetino attaches strings to Pinocchio's hands and feet and hangs him up with Twinkle. The Good Fairy appears and awakens Pinocchio, explaining that he lost his freedom because he took it for granted. She reminds him of the importance of choice before restoring him to human form.

Pinocchio decides to retrieve the jewel box. Willikers is upset so Pinocchio sets him aside and travels alone. He finds Scalawag and Igor, who inform him that the box is at the carnival, which has returned to the ship. They pursue it by boat, but the ship suddenly opens up, swallowing the boat. Willikers, carried to the river by Grumblebee, latches onto Pinocchio's pocket as they drift into the ship.

Scalawag recognizes the ship as "the Empire of the Night". A boatman offers Pinocchio a ride to the jewel box, leaving Scalawag and Igor behind. The boatman says the box is in the opposite, darker end of a cavern. Pinocchio prefers the brighter path and they row to the "Neon Cabaret", a gigantic, modern-looking casino-like palace where the fun never stops and the party never ends. The boatman recognizingly calls it "The Land Where Dreams Come True". A doorman says that Pinocchio can play inside if he signs a contract. Pinocchio impulsively agrees, running inside and drinking from a fountain of green liquid that causes him to hallucinate and black out.

Pinocchio awakens on a stage; a ringmaster says his fans are waiting and Pinocchio begins dancing while he was surrounded by such brilliant rainbows, shimmering stars and dancing girls made of glowing magical energy. Scalawag and Igor, who have followed Pinocchio, try to get Pinocchio's attention but are drawn offstage while he is distracted by Twinkle who was still a prisoner of the Empire of the Night. Pinocchio bows to thunderous applause.

Puppetino appears and Pinocchio turns to find the boatman, who transforms into the doorman and then the ringmaster. He tells Pinocchio that he has reached the "Land Where Dreams Come True" and then morphs into a floating being with four arms—the Emperor of the Night. He demands Pinocchio sign a contract that will make him a puppet again, a choice that will weaken the Good Fairy. Pinocchio refuses and is imprisoned with Scalawag and Igor. Scalawag laments that they have succumbed to their desires without considering the consequences. The Emperor reveals to Pinocchio that Geppetto has been shrunk to fit inside the jewel box. Pinocchio offers to sign the contract if the Emperor frees Geppetto and the others. Pinocchio signs away his freedom, transforming back into a living puppet.

The Emperor betrays Pinocchio, telling him that the freedom of choice gives him his power. Pinocchio turns on the Emperor and a blue aura—the light of the Good Fairy—surrounds him. The Emperor shoots bolts of flame at Pinocchio but the blue light protects him as the ship catches fire. Pinocchio along with Scalawag, Igor and Twinkle made escape as the Emperor's own Empire began crumbling down around them, while Puppetino in his complete cowardice chose to run for his life, but failed when the Emperor turns his weak slave into a puppet. The gang, after passing through the crubling Empire's nightmarish illusions, amde to the upper decks of the Emperor's ship with the help of Willikers and Grumblebee. The Emperor promises to make Geppetto pay for Pinocchio's choices and Pinocchio plunges into the Emperor's flaming figure, destroying him and his ship. On the shore, Geppetto has returned to his original size. Scalawag and Igor find Pinocchio, who is once again a real boy. The Good Fairy appears, proudly telling Pinocchio that he no longer needs her. She presents the jewel box to Geppetto. She reveals Twinkle awakening nearby before fading away, leaving the group to celebrate. 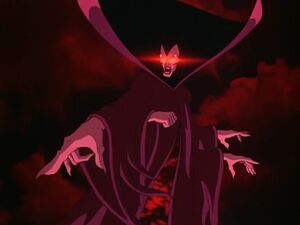 The Emperor of the Night 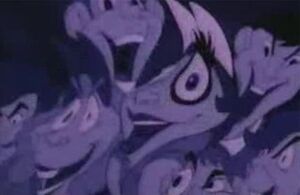 This other dimension with nightmarish laughing faces is known as The Empire of the Night. 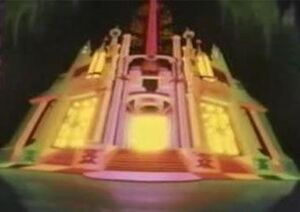 The Land Where Dreams Come True 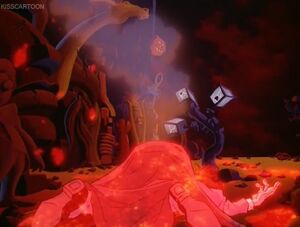 The end of the Empire of the Night. 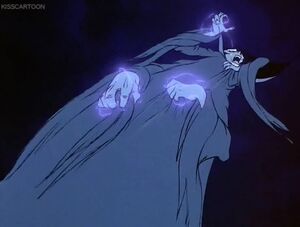 The Emperor of the Night turns into a swirling, bluish tornado of nothingness as he dies. 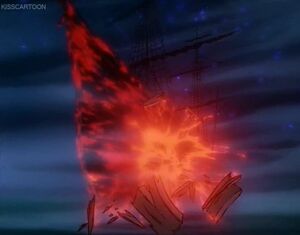 The Ship now being destroyed with an intense explosion.
Community content is available under CC-BY-SA unless otherwise noted.
Advertisement