The Evil Wiki
Register
Don't have an account?
Sign In
Advertisement
in: Mature, Evil Arenas, Evil Lairs,
and 5 more

To serve as both home and training ground for the Shadow Priests forever.

The "Evil Monastery", also known as the "Evil Tower" and "The Tower", is a diabolical ancient tower-like temple home to the Shadow Priests located in the realm of Outworld and one of prominent locations in Mortal Kombat franchise.

As one of Shao Kahn's important assets, this wicked structure was built as the home of several Shadow Priests as well as the very place where they train their magics. In addition of the priests, the tower is also inhabited by samurai-esque armor-clad demons acting as its security guards called Demon Archers, Demon Captains, Demon Generals and Demon Handlers each tougher than normal humans. Being Shao Kahn's top and royal sorcerers with Shang Tsung as their commanders, Shadow Priests themselves also no slouch either, having mastered various spells so they can properly either guard portals linking to various locations in Outworld and attack trespassers with various magic spells while supporting nearby comrades with magical enhancements such as strength and vitality augmentation. Their training includes means to evade grabs and crippling blow meant to initiate Fatality (brutal finisher which typically involve severe mutilation on the weakened opponent).

Befitting to its other moniker Evil Tower and The Tower, Evil Monastery was built so high that a blue sky can be seen.

The Evil Monastery is also filled with death traps one can use against foes, such as retractable spikes, magma floor, and even blue portal that will (presumably) fatally suck in those who unfortunate enough to be hurled into it.

In 2011 game, the background of the Evil Monastery constantly shifts between night and day, filled with golden statues of robed skeletons holding swords across its chambers and at least a single sundial. 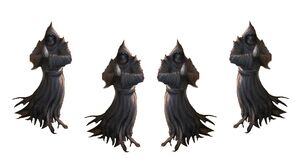