The Eyrie Pyramid is a pyramid-like structure built over the Eyrie Building, with Castle Wyvern as its apex.

The Eyrie Pyramid is the name of the biggest and tallest building in Manhattan in 2198 A.D. Technically, it is the super-modernized Eyrie Building. It will still be crowned by Castle Wyvern and the Manhattan Clan will continue to reside there. The building will be owned by the Lexington-Xanatos Corporation.

In Puck's "Future Tense" illusion, the Eyrie Pyramid was a huge building complex in Manhattan with the Eyrie Building at its core and culminating in a massive pyramid-like structure placed over Castle Wyvern. It served as a sort of broadcasting screen, allowing the Xanatos Program, masquerading as Xanatos, to deliver public messages to the few remaining citizens of New York. The Xanatos program is actually created and controlled by an alternate and evil version of Lexington who presided over the Eyrie Pyramid. It is unknown if the true Eyrie Pyramid of the future will resemble Puck's vision of the building, though it seems likely. 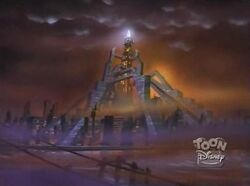 Add a photo to this gallery
Retrieved from "https://evil.fandom.com/wiki/Eyrie_Pyramid?oldid=22470"
Community content is available under CC-BY-SA unless otherwise noted.