The Evil Wiki
Register
Don't have an account?
Sign In
Advertisement
in: Mature, Villainous Events, Theological Villainy,
and 7 more

The "Fall of Man" refers to the moment Adam and Eve gave into temptation and ate from the forbidden fruit of knowledge from the Tree of Conception, thus breaking a sacred bond between them and God - resulting in them being banished from the Garden Of Eden and (according to some texts) many of the ailments that troubled modern humanity.

According to most scripture God created Adam and Eve, allowing them to reside in the paradise known as the Garden Of Eden where he granted them the freedom to do as they pleased providing the follow his one rule: to never eat from the fruit of the tree of knowledge.

Knowing of this agreement Satan took on the form of a serpent and tempted Eve into tasting the forbidden fruit, Even in turn was said to tempt Adam into doing the same - the two at once began to feel ashamed of their naked forms and also became fearful of God's anger.

So it was when God came to speak with his two creations he found them hiding, upon asking them why they hid from him they eventually admitted to their crimes but Adam blamed Eve while Eve blamed the serpent.

God cursed them all, starting with the serpent - who he removed the limbs of so it would forevermore slither across the ground: he then cursed Adam with hard labor and Eve with pain in childbirth.

Finally, since the two had disodied God, they could no longer be permitted to live in paradise so God had them removed and ordered a cherub armed with a flaming sword to stand watch over the Garden so that no man could gain access to the Tree of Life.

As a result of this event it was said humanity lost its original state of innocence - years later the idea of humanity falling further from grace was showcased when Cain, in a fit of anger, killed his brother Abel, becoming the first murderer. 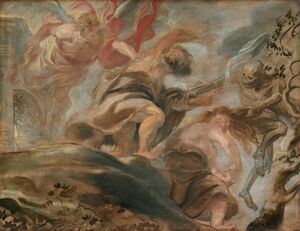 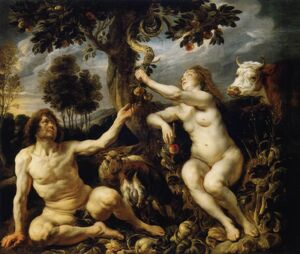 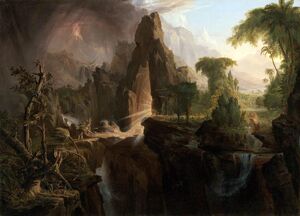 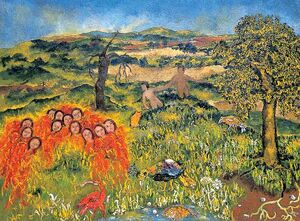 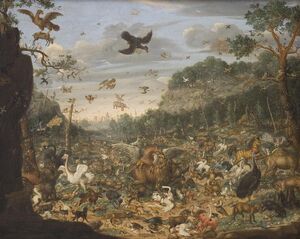