The Fear Toxin, also known as Fear Gas, was the signature weapon used by the Scarecrow. It induced involuntary and sometimes irrational fear in its victims' minds, driving them insane.

While Scarecrow never appeared a version of his Fear Gas was used by the outlaw Shame. Here instead of showing a person's worst fears, it caused the person to become a coward towards everything. It eventually wears off.

The Scarecrow used his Fear Toxin in the Batman: Animated Series in all of his major schemes. In the animated series the gas was colored red (possibly to make it distinguishable from the Joker's green laughing gas). In his first appearance, the Scarecrow simply uses it as a weapon to protect himself or ward off interferences (by spraying it through vents in the fingers of his gloves). Batman, however, finds his lair and opens the tanks containing the gas, exposing Scarecrow to his own gas and sending him to Arkham. When Scarecrow returns, he makes the gas into a powder that he uses to rig some sport games and collect bid money to fund his "experiments." He attempts to drop a vial onto the audience in the stadium, but Robin catches the vial and Scarecrow is captured by Batman. In his next appearance, Scarecrow exposes Batman to a large dose of the gas (causing him to almost lose his mind). While Batman struggles to get a grip on reality, Scarecrow plans to vent the gas into the city's water supply. Batman shows up and stops Scarecrow's men, but Scarecrow hits the lever and runs. Batman, however, manages to stop the machine before it can vent the gas and the whole thing explodes. Scarecrow attempts to escape, but is exposed to all the gas that escapes from the destroyed machine. He is then sent back to Arkham, scared out of his wits.

Fear Toxin plays an important part in the player's confrontations with Scarecrow in the game. After being exposed to a gaseous form of the toxin while walking, Batman experiences elaborate hallucinations- ranging from finding his parents' bodies in the Arkham Asylum morgue, reliving his last moments with them as they lived, and an 'inversion' where he is the lunatic who has been brought into Arkham by the Joker-, culminating in him being forced to travel through a twisted, nightmare-esque version of Arkham Asylum while evading a giant Scarecrow who will crush him if caught. These confrontations end when Batman shines the Bat-Signal on Scarecrow at the end of the 'maze', the Signal apparently representing Batman's strength of will as he focuses to bring himself out of the hallucination; Scarecrow himself notes that Batman continued to resist even after taking in enough toxins to drive a dozen men insane.

Also through one of the Riddler's riddles, you find a few canisters of Fear Gas.

The Fear Toxin is the main part of Ra's al Ghul's master plan to destroy Gotham. The gas is actually made from the Blue Poppy near Ra's al Ghul's dojo. Dr. Jonathan Crane is the chief therapist at Arkham Asylum, he has a vast amount of knowledge in science due to working with medicine for his patients. Crane makes an alliance with Ra's al Ghul and Falcone and uses the flowers to make his deadly fear toxin. Crane also has Falcone sneak in necessary ingredients for the toxin. Crane tests the gas on his patients, while doing so he creates a special mask that resembles that of a scarecrow. Crane keeps a large amount of gas for himself and uses it through special gas sprayers he keeps on his wrists.

Crane puts the final steps of the plan into action when Ra's al Ghul's men deliver him a special Wayne Industries device that can convert liquid into gas. Crane has a liquid form of the toxin poured into the water supply and it is soon activated on a moving train, gassing the parts of Gotham it passed and putting all citizens caught in it into a state of panic. Crane escapes from Arkham after a defeat from Batman (where he was stripped of his mask and sprayed with his own toxin which destroyed the rest of his sanity) and rides through the streets on a horse, terrorizing the citizens of Gotham. Scarecrow however is forced to retreat after being shot in the face with a taser gun by Rachel Dawes. Batman manages to make a cure for the toxin and it is reproduced to cure the victims of Crane's gas. The toxin is later halted and flushed out of the water supply.

Scarecrow uses his fear toxin to keep people in constant fear of him. He injected Killer Croc with toxin so that it coursed throughout his body and Croc could pass the toxin on by biting people.

The Fear Gas is only used briefly in this movie. Scarecrow had apparently kept a large amount of toxin for himself and even tried to sell it to street gangs. During a meeting with one of his buyers over the unsatisfactory results of his toxin, they are interrupted by some false Batmen, one attacks Scarecrow and he repels him by spraying him with the toxin. After the real Batman shows up, he captures the gangsters and eventually the escaping Scarecrow.

It's unclear what became of the toxin after Scarecrow was captured. It's quite possible that he had a supply in the truck he was driving, which was probably left for police capture along with the criminals. Though Scarecrow must have also had a large amount of gas in other areas of the city (like back at Arkham), this may be hinted at the fact that Scarecrow was smiling when he was captured by Batman. It's possible that perhaps Scarecrow has a plan to escape from Arkham and retreat back to one of his storage facilities. 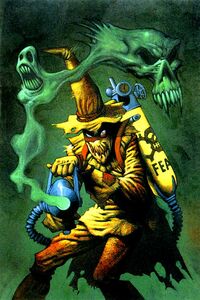 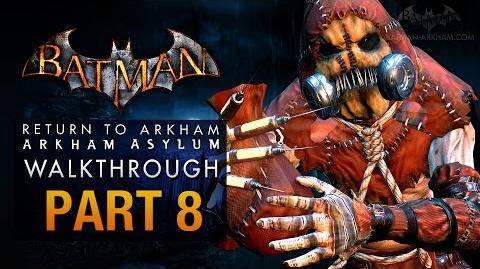