The Fiery Pit is an evil place and a location in Neverwinter Online. This area is the territory of the Cult of Eternal Flame led by Vanifer, known as the Prophet of Fire, right inside Gauntlgrym. The place, filled with lava and boiling madness, is one of the four new locations added for Elemental Evil arc alongside the Drowned Shore, the Reclamation Rock and the Spinward Rise.

Within the newly-discovered dwarven city of Gauntlgrym, the dwarves had found the task of rebuilding the city to be too great an undertaking to accomplish within their lifetimes, and ultimately agreed to hire a company of artisans skilled in dwarven craftsmanship to aid them. No sooner had they rebuilt the Great Forge, however, than the artisans revealed themselves as the Cult of the Eternal Flame, crazed worshipers of Imix, and drove out the dwarves.

Working with both the Harpers and the Lords Alliance, the dwarves put out the call for adventurers to reclaim their ancient home. The call was answered by the Heroes of Sleeping Dragon Bridge, who delved deep into Gauntlgrym. They discovered that the cultists had created a fire node, and intended to awaken the primordial Maegera to use her power to create a devastation orb, in order to set the entire Sword Coast ablaze.

When the cultists captured Delzoun-blooded dwarves to shut down the water pumps keeping Maegera asleep, the heroes knew they had to act fast. Though they defeated the cultists' leader, the tiefling prophet Vanifer, she swore that she would return. With the dwarves rescued and the cultists routed, however, the immediate threat had passed.

However, this does not mean the end of this fiery madness, just like that of the Mount Hotenow which awaits its next eruption since the last one that destroyed the old Neverwinter. Later, as Drizzt Do'Urden and his companions celebrated their success in destroying the Maze Engine, in the depths of Gauntlgrym, Vanifer was visited by a projection of Vizeran DeVir, who named himself Harbinger of the Elemental Eye... and Vanifer's true master. 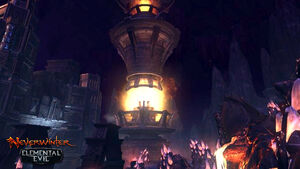 The Fire Beacon
Add a photo to this gallery
Retrieved from "https://evil.fandom.com/wiki/Fiery_Pit?oldid=48005"
Community content is available under CC-BY-SA unless otherwise noted.