The Evil Wiki
Register
Don't have an account?
Sign In
Advertisement
in: Possessed Objects, Villainous Vehicles, Paranormal,
and 6 more

The Flying Dutchman (in Dutch: "De Vliegende Hollander") is a legendary ghost ship from 17th-century nautical lore. This supernatural phenomena which has existed for hundreds of years, is said to occur out at sea and involves the apparent manifestation of an old spectral ship that proceeds to try and hail signals to nearby ships as the long dead crew try to contact the living.

The presence of this frightful vessel is seen as a harbinger of doom for any ship that has seen it, often involving storms or other hazards that could result in the sinking of the ship.

The Flying Dutchman itself was said to be the doomed vessel of a captain who went mad at sea and somehow damned himself and possibly his crew to an eternity of sailing the Seven Seas - wherever the Flying Dutchman sails the weather is said to change for the worse, another sign of its omen as a bringer of storms and catastrophe. 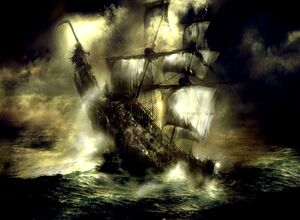