The Force Choke, also known as the Force Grip, is a technique used in the Star Wars universe, most often by Sith - it involves using the Force to create an invisible ring of energy around a victim that proceeds to choke the life out of them akin to telekinesis.

It is most famous for being used by Darth Vader (once known as Anakin Skywalker before the death of his wife Padmé Amidala at his hands) himself to enforce fear in his underlings, it has also been used by many other Siths and although he never used it in the original films, the Sith Lord, Emperor Palpatine (also known as Darth Sidious) no doubt knew this technique as well.

Force Choke was a Dark Side Force power, meaning that the power was fueled from negative emotions such as fear, anger, and hatred. As the name suggested, Force choke was used to squeeze a victim's throat with the Force, rendering them unable to act. Sometimes the person would be lifted off the ground by the Force choke. The power was generally used at close range, but in rare instances the target could be choked at greater distances if they are seen through a viewscreen. Depending on the degree or power applied, the effects of a Force choke on a person would result in either death, unconsciousness, or simply leaving the person gasping but still conscious.

Force Choke was generally used against one target at a time. However, in some instances, perhaps involving an increase of Dark Side power fueled by rage, two targets could be grabbed in a Force Choke at the same time. Both Asajj Ventress and Savage Opress demonstrated this on different occasions.

Force Grip was used to inflict harm or injury for various purposes. Sometimes it was used simply as an expression of anger or displeasure. Other times it was used to kill outright. Force Grip was an effective tactic when engaged in lightsaber combat. Force Choke was also used for intimidation and interrogation. Related to this, Force choke could also be used as a display of power.

Generally, the Force Choke was used by the Sith. However, despite their strict adherence to the Light Side of the Force, several Jedi were known to use this power themselves. 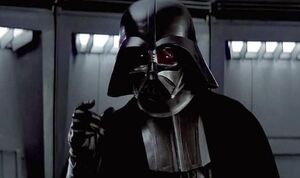 Darth Vader using the Force Choke on those who lacks faith in the force or failed the Galactic Empire.
Add a photo to this gallery

Retrieved from "https://evil.fandom.com/wiki/Force_Choke?oldid=88143"
Community content is available under CC-BY-SA unless otherwise noted.