The Evil Wiki
Register
Don't have an account?
Sign In
Advertisement
in: Article stubs, Evil Lairs, Contradictory,
and 2 more

Freddy Fazbear's Pizza, or quite simply Freddy's, is a fictional restaurant in which the titular videogame Five Nights At Freddy's takes place. Despite the restaurant's charming and friendly tone, it possesses a dark secret.

According to posters in the first game, an incident occurred when a man, dressed in an animatronic suit (confirmed to be Spring Bonnie), lured two and eventually five kids in total into the back of Freddy Fazbear's Pizza; however, nowhere does it say that he actually murdered them. The suspect was eventually caught, but in the end, neither the children nor their bodies were ever found.

In the first game, the restaurant is actually set to be shut down later in the year; complaints to the Health Department about blood and mucus leaking from the suits, as well as a horrid odor, are allegedly the cause. Furthermore, business has been bad, and the management could not find a buyer for the pizzeria since no one cared to be associated with the name, giving them no other choice but to close the place down. Due to the incidents, the restaurant has been unable to earn a substantial amount of revenue. This resulted in the implementation of a power budget at night. It is also for these reasons that the establishment is being forced to close down at the end of the year.

This means that electricity at night must be used wisely, as there is no further delivery of power during the night phase of the game. Using doors, lights, and even the security cameras will cause the power to drain depending on the player's power usage.

The player must survive all five nights to complete the initial game itself; however, upon completing Night 6 is unlocked. Upon beating the 6th Night, an addition Custom Night is also unlocked, where the player can set the difficulty of the animatronic's A.I. from 0 to 20.

In the events of Five Nights at Freddy's 2, Freddy Fazbear's Pizza seems to have been a larger establishment before the events of the first game took place. As mentioned in a newspaper after beating Night 6 of the second game, the restaurant would soon be shut down. However, the possibility of a reopening is mentioned, albeit with a lower budget. This may explain why the restaurant in the first game has limited power, a smaller location, and 4 active animatronics instead of 6.

The animatronics include updated versions of the main four along with a balloon vendor and dancing puppet. They come complete with facial recognition technology and are linked to criminal databases. The pizzeria has more rooms than the location in the first game, including four party rooms.

As the week progresses, terrible things start to happen within the restaurant that result in an investigation, lockdown, and eventually its closing. Someone tampers with the animatronics' facial recognition feature. They also begin to behave strangely around adults, yet are normal when interacting with the children.

A spare suit, that of Golden Freddy's, is stolen and supposedly used to lure children into the back, where they are murdered. Finally, the Night 6 phone call implies that the Bite of '87 will occur at the next day's birthday party.

Five Nights at Freddy's 3 takes place 30 years after the events of the first game. Freddy Fazbear's Pizza is shut down for good, and instead the game takes place in a horror attraction known as Fazbear's Fright: The Horror Attraction.

In the pizzeria, they are many animatronic characters that are to entertain children at the family-friendly diner: 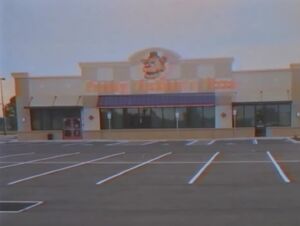 The Freddy Fazbear's Pizza restaurant as depicted in its rare 1980s television commercial.