The Freedomland is an oppressive slavery-themed amusement park and an titular location in The Boondocks series.

The Freeman family except Huey are all sitting on the couch in boredom with Riley finding entertainment from VH1's "Basketball Wives" and reminds everybody why Malaysia will always be a fan favorite from the franchise.

In the midst of being 'bored' they get a message from Uncle Ruckus that Eddie Wuncler wants to meet with them but Grandad sees no point. Huey reminds him of the deal he made with Wuncler and persuades him otherwise. Once they get to Wuncler's, he offers them a job at a theme park which to may be a bit too authentic. The theme park is called 'Freedomland' that looks like a scene straight out of movie denoting slave times but with amusement and even cotton candy added for comical purposes.

Tom Dubois joins in to help but ends up right along in trouble with the others. Uncle Ruckus shows up on a white horse which has a slight irony to it along with a whip that he uses just like how Jesus could make things happen with 'gently snappin' of his finger.'. So with Ruckus basically acting like Samuel L. Jackson's infamous character Stephen in Django Unchained, while Huey is called "N--er One" or "One" and Riley becomes dubbed "N--er Two" or "Two", Uncle Ruckus affectionately named his white horse "N***a". Like really? Tom Dubois thinks the whole thing is inhumane and remains in disbelief that he is witnessing this. Uncle Ruckus does not care. When Huey decides he will take a stand to help his grandfather as he will not be anyone else's property, he subjects himself to being put in a box dressed in clown make-up while young patrons use guns filled with water to shoot at him and two other boys; Ruckus emcee's the lower class activity.

Grandad does not like that at all and threatens to whoop the children's behinds if they do not stop with the water guns. The others get Huey out of the box and wipe the make-up off him. When they are ready to leave as the park was closing, Uncle Ruckus has about a dozen guards all lined up horizontally at the gates refusing to let the quad go. Ruckus takes them on a tour of 'Freedomland' where they see cotton pickers and forced tap-dancers before he locks them up in a room. Tom reminds him that the whole setup is unconstitutional for the enslavement of people at an amusement park but as usual, the pleas of a black man phases Ruckus none. Tom apparently became recently more aggressive because he explodes on the Freeman family for him being entrapped with them before he calms down, that changes the minute Ruckus comes back to inform Tom that Sara 'bought his freedom'. He leaves quicker that Kim Kardashian running away from a marriage. Riley then hopes that Huey has a plan and he shows great confidence and acknowledgement in his brother openly when he says, "You always got a plan.". While Huey is having a meeting late night with the others held captive, the next morning, Wuncler has a meeting of his own where he dresses up like George Washington at the Wuncler estate.

After Wuncler's recent attempt at negotiating with Huey Freeman even including '40 acres and mule' proves to be a failure, Huey decides the attack to gain back their 'freedom' must happen soon. Huey ends up on platform, barefooted and hand tied, where Wuncler takes an ax ready to chop off Huey's feet to give people at Freedomland "historical accuracy" but was later get kicked in the face by Huey when he missed chopping off his feet before Grandad rescued his grandson and gives out a whistling signal to all of their fellow prisoners. All of the sudden, chaos ensues loose and the fight starts. Now, Huey and the captors end up winning but Wuncler, who suffers a beat-down as well, ends up retreating with Uncle Ruckus who later boastfully asked "Tell me ungrateful bastard, what could ever be greater than Freedomland?", and Huey Freeman answered "Freedom". 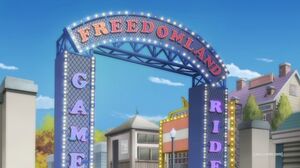 Freedomland
Add a photo to this gallery
Retrieved from "https://evil.fandom.com/wiki/Freedomland?oldid=70295"
Community content is available under CC-BY-SA unless otherwise noted.