Gehenna (Greek γέεννα), also known as Gehinnom (Rabbinical Hebrew: גהנום/גהנם) and Yiddish Gehinnam, is a realm that is the destination of the wicked and the place of punishment for evildoers within the Jewish, Christian and Islamic scripture, and its names are terms derived from a place outside ancient Jerusalem known in the Hebrew Bible as the Valley of the Son of Hinnom (Hebrew: גֵיא בֶן־הִנֹּם or גיא בן-הינום); one of the two principal valleys surrounding the Old City.

In the Hebrew Bible, the site was initially where apostate Israelites and followers of various Ba'als and Caananite gods, including Moloch, sacrificed their children by fire (2 Chr. 28:3, 33:6; Jer. 7:31, 19:2-6).

This is different from the more neutral Sheol/Hades, the abode of the dead, though the King James version of the Bible translates both with the Anglo-Saxon word "Hell".

This was known in the Old Testament as Gai Ben-Hinnom, literally the "Valley of the son of Hinnom", and in the Talmud as גהנם Gehinnam or גהנום Gehinnom.

In the Qur'an, Jahannam (in Arabic: جهنم) is a place of torment for sinners and non-believers, or the Islamic equivalent of Hell.

Tombs in the Valley of Hinnom The exact location of the Valley of Hinnom is disputed. Older commentaries give the location as below the southern wall of ancient Jerusalem, stretching from the foot of Mount Zion eastward past the Tyropoeon to the Kidron Valley. However the Tyropoeon Valley is usually no longer associated with the Valley of Hinnom because during the period of Ahaz and Manasseh, the Tyropoeon lay within the city walls and child sacrifice would have been practiced outside the walls of the city. Smith (1907), Dalman (1930), Bailey (1986) and Watson (1992) identify the Wadi er-Rababi, which fits the data of Joshua that Hinnom ran East to West and lay outside the city walls. According to Joshua, the valley began in En-rogel. If the modern Bir Ayyub is En-rogel then the Wadi er-Rababi which begins there is Hinnom.

It is similar to the Lake of Fire. Sometimes, there are people of status with Complete Monster from fiction and Absolute Evil and with Damned souls to face here.

In D&D, Gehenna was a Lower Plane whose theme was greed and cruelty. It was mildly lawful, but evil nonetheless, being between Baator and Hades It has four layers which are dominated by volcanic mountains: 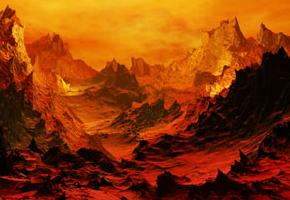 Gehenna.
Add a photo to this gallery

Retrieved from "https://evil.fandom.com/wiki/Gehenna?oldid=100596"
Community content is available under CC-BY-SA unless otherwise noted.