The Genesis Wave was a cataclysmic event in the Sonic the Hedgehog comic book universe involving the maniacal scientist Dr. Eggman creating a device that could rewrite reality itself, and the event resulted in a near-instant retcon of the planet Mobius and its inhabitants: this calamity would be followed by the even more deadly Super Genesis Wave when Eggman teamed up with fellow power-hungry madman Dr. Wily to rewrite reality on a multiversal scale.

While recovering from insanity, Dr. Eggman theorized that the reason he could never defeat his arch-enemy Sonic the Hedgehog was because that years of absorbing chaos energy from the Chaos Emeralds has made Sonic into the embodiment of chaos. So to counteract this, Eggman built a new Death Egg capable of creating the phenomenon known as the Genesis Wave with the use of a single Chaos Emerald.

Later, Dr. Eggman meets Dr. Wily, another mad scientist from an alternate world, and together create another Genesis Wave that effects both their realities.

The Genesis Wave can drastically alter reality on whatever world it effects, often leaving the effected inhabitants with amnesia, senses of deja vu or very vague memories of the unaltered world. The Genesis Wave has also been shown that it is capable of effecting more than one world and can be reversed using the ability Chaos Control with large amounts of chaos energy, although the one using the ability must really concentrate, otherwise the results can be catastrophic. However, the wave does have some limitations: for one thing, it is apparently incapable of outright erasing individuals from existence. Use of the wave can also be very dangerous, as it can cause the affected world's reality to become unstable and if the the problem is not corrected, it can destroy the world. 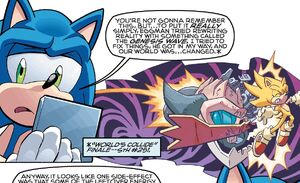 The Genesis Wave, as remembered by Sonic the Hedgehog.
Add a photo to this gallery

Retrieved from "https://evil.fandom.com/wiki/Genesis_Wave?oldid=76713"
Community content is available under CC-BY-SA unless otherwise noted.