The Evil Wiki
Register
Don't have an account?
Sign In
Advertisement
in: Villainous Tools and Other Items, Villainous Events, Technology,
and 7 more

Brain Room within the Brain Base

The Giga Brain Wave is brain energy phenomenon whose completion is secretly the goal of the leadership of Armed Brain Army Volt.

It was devised by Great Professor Bias as a means to keep himself immortal by absorbing mental energy from the brains of 12 geniuses each with a 1000 IQ. The setup for it is kept hidden in a secret chamber of the Brain Base called the "Brain Room".

The Giga Brain Wave is formed using the brains of geniuses who have each served as students of Bias and been guided to achieve a 1000 point IQ by him. Once a student reaches the ideal IQ, their brain is extracted and placed in a special container that keeps it alive, allowing Bias to absorb energy from them to keep himself young. All of the brains used for the Giga Brain Wave are subject to the whims of Bias and able to do nothing but think.

To maintain his youth, Bias must regularly absorb energy from the brains, otherwise he will revert to his true age. In addition to keeping himself young, Bias can also use the Giga Brain Wave to telepathically mind control others if they've been equipped with a special device, giving Bias complete command over their actions.

The Giga Brain Wave was first devised by Bias generations ago as a means for him to cheat death. To gather candidates for the ritual, Bias took on numerous students and educated them until they reached IQs of 1000, at which point Bias extracted their brains to use for his Giga Brain Wave. Through the Giga Brain Wave, Bias was able to maintain his lifespan by regularly absorbing energy from them to keep himself young.

After repeating the process 11 times, Bias set up the Armed Brain Army Volt to find a twelfth and final student to complete the Giga Brain Wave. He eventually set his sights on two students at Academia Island, Kenji Tsukigata and Rui Senda, both of whom possessed some of the highest intelligences of the students on the island, as well as superiority complexes that made them ideal pawns for Bias. Bias sent them both tests to complete and after they passed, accepted them into Volt. He also allowed Gou Omura to join in order to give Kenji and Rui someone to compete with.

Bias had his three students take on new identities as Doctors Kemp, Mazenda and Obular, and compete against each other to create Brain Beasts to defeat the Livemen. To motivate his students to study harder, Bias brought in Doctor Ashura and created two robots named Guildos and Butchy, who he programmed to believe were space aliens who had come to join Volt, in order to use the pressure from competition to get his students to think more creatively. The only other member of Volt to be in on Bias's true plans was his robot bodyguard, Guardnoid Gash, who Bias had programmed with knowledge of his true plans.

Eventually, Bias's students narrowed to just Kemp and Mazenda, both of whom had now scored over 900 and were close to reaching 1000. Mazenda was first to obtain a 1000 point brain, but soon found out about Bias's plans from Gou and converted herself into a robot to keep Bias from taking her brain, leading Bias to kill her. Soon after, Kemp was able to obtain a 1000 point brain, allowing Bias to extract it and use it to complete the Giga Brain Wave.

With all twelve brains gathered, Bias used the complete Giga Brain Wave to mass hypnotize the entire world into hailing him as their leader and bowing before him. Among those caught in the Giga Brain Wave were Jou, Megumi, Tetsuya and Junichi of the Livemen, though Yusuke managed to avoid it by sneaking aboard the Brain Base at the last moment. When Colon came in Live Robo to protect them from Fear Beast Brain, Bias commanded the four Livemen to throw their robot ally of a cliff to destroy her.

However, Yusuke managed to uncover Bias's Brain Room and avert the Giga Brain Wave by stabbing Bias. Despite this, Bias was able to absorb the energy of Kemp's brain to keep himself alive, reverting his body to that of a child's in the process. After Kemp rallied the other 11 victims of Bias to rise up and rebel against him however, the Giga Brain Wave was disrupted forever and Bias reverted back to the body of an old man. 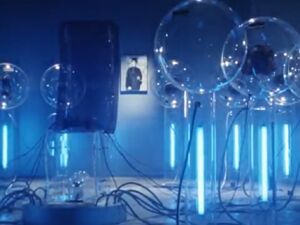 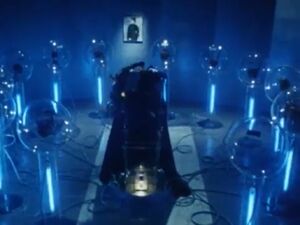 Bias enters the Brain Room to rejuvenate his life. 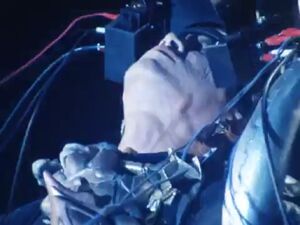 Bias hooked up to a device to absorb energy from the brains. 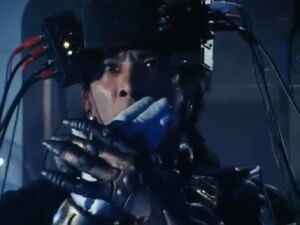 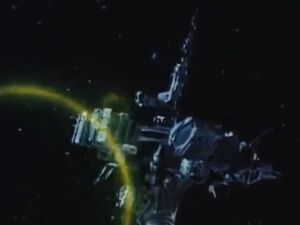 The Brain Base broadcasting the Giga Brain Waves to the entire world. 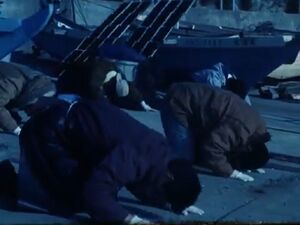 The people of the world are caught in the Giga Brain Wave and compelled to worship Bias.
Community content is available under CC-BY-SA unless otherwise noted.
Advertisement