The Godbird Sceptre is an ancient magic stave and the major plot element in Dragon Quest VIII: Jounery of the Cursed King. This object was the treasure stolen from the Trodain Castle by the wicked jester Dhoulmagus, in spite of the fact that the scepter is a vessel and prison for the spirit of Lord Rhapthorne who possess anyone who touches the cursed relic.

It is a tall brown rod adorned with blue sapphire gems and a bronze bird sculpture on top of the scepter with a ruby orb in it's mouth resembles Ramia the Godbird.

When the Seven Sages imprisoned Rhapthorne in the Goddess Statue in Neos, the scepter became his tool to use on the outside world as his own unwanted prison sinc ehis defeat. For countless years, the scepter imbued with the power of Rhapthorne was held in the Castle of Trodain, guarded at all times, and valued as its most precious treasure.

With this powerful sceptre, he transforms the inhabitants of Trodain into plant-like statues, as well as changing the king into a toad-like monster and the princess into a horse, while covering the majority of the castle in large, green magical thorns.

The Hero, a young Trodain guardsman, is eventually joined on his quest by three companions: a scarred, inarticulate bandit named Yangus, a wand-waving tomboy named Jessica, and Angelo, a rapier-wielding Templar Knight and self-proclaimed ladies' man.

During their travels, the party runs into Dhoulmagus several times. A couple of these encounters involve Dhoulmagus killing someone beloved by members of the Hero's party. Individuals slain by Dhoulmagus include Alistair (Jessica's brother) and Abbot Francisco, who is head of the abbey where Angelo lives.

The party finally tracks down Dhoulmagus to the Dark Ruins, where they find him recuperating, and finally face off against him. After his defeat, he tries to curse the party with his sceptre, but the hero is again unaffected by the curse, blocking the blast and sparing his allies.

Dhoulmagus then uses his menacing power to change into a hideous demonic creature. However, even with his new powers, he is no match for the might of the heroes. Much to their surprise, however, they find that even with his defeat, the curse still has not been lifted.

Concluding that something else must be maintaining the curse, they exit the ruins, with Jessica picking up the Godbird Sceptre as they leave. 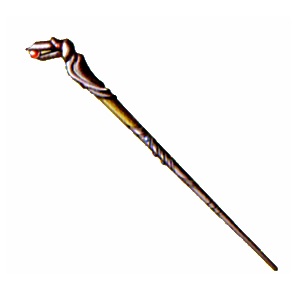 Dhoulmagus
Add a photo to this gallery

Retrieved from "https://evil.fandom.com/wiki/Godbird_Sceptre?oldid=47483"
Community content is available under CC-BY-SA unless otherwise noted.