Hellspawn demons
Souls of the dead

To be the home and domain of Hiruko Ubusuna.

The Golden Palace (in Japanese: 黄金城, Okonjou) is a gigantic, supernatural shiro-styled palace created by the sorcerer Hiruko Ubusuna in the middle of modern-day Tokyo and a well-known location in the 2002 3D action-adventure videogame Shinobi. This twisted towering imperial palace of Japanese design has a an eye symbol of the Gojufu talismans on it the front of its upper balcony and and both its exteriors and interiors are completely made of solid gold. It was constructed by Hiruko with the aid of malicious and mythical demons known as the Hellspawn as a monument to his power and his rule over the Earth and all of its inhabitants. It is guarded over by the sentient main gate called Jigokumon at the palace's keep.

72 years ago, Hiruko who was skilled in the dark arts, created a giant, strange castle composed of pure gold known only as the Golden Palace, to declare himself emperor while trying to plunge the world into darkness by performing intricate and unholy ceremonies. He was later stopped by the Oboro Clan, and after his death, they sealed him in a tomb within a temple that will be soon guarded by the Ubusuna family for generations.

But decades later, Ageha, a rogue Oboro ninja driven mad by the loss of her love Moritsune, broke into Kumano Shrine where Hiruko was being held and broke his seal. Upon his release, he caused a catastrophic earthquake that led to the city of Tokyo's decimation and a horde of Hellspawn summoned by this phenomenon proceeded to appear in the streets, turning Tokyo into a demon city. This would also lead to the obliteration of the Oboro Clan.

Hotsuma, the leader and sole survivor of the clan flew into Tokyo to uncover the mystery of his clan's massacre. After discovering the mad sorcerer was the cause, he would cut through swaths of Hellspawn and undead Oboro Ninja, feeding their corporeal essences into the demon blade Akujiki. Eventually Hotsuma would face Hiruko at the Palace Keep, and destroyed the heretical Onmyoji. With his victory, the Golden Palace collapses and sinks back into the Earth.

One year after Hotsuma's triumph and sacrifice, the government sealed Akujiki away to prevent further calamity, but when the Nakatomi seek to steal Akujiki, the shards of the phantom blade rage out of control creating new Hellspawn. Hibana, the last of the Oboro family, is sent to retrieve the shards before Nakatomi can get their hands on the sword. After a lengthy struggle with both the Hellspawn and the Nakatomi Mercenary Ninja led by her former master Jimushi, Hibana faces the android Kurohagane, now possessed by Akujiki's evil will, and defeats him at the ruins of the Golden Palace. 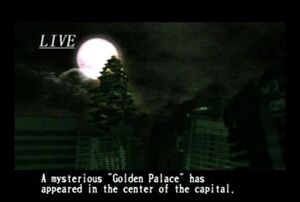 The Golden Palace in modern-day Tokyo on a live news feed. 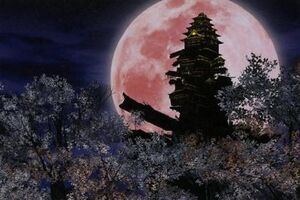 The Golden Palace
Add a photo to this gallery
Retrieved from "https://evil.fandom.com/wiki/Golden_Palace?oldid=93114"
Community content is available under CC-BY-SA unless otherwise noted.