The Gozerian Alphabet is an alphabet consisting of 26 letters seemingly derived from ancient Sumerian language and observed in the mythology of the destructive Sumerian deity known as Gozer the Gozerian and other entities and monsters associated with him. It is employed by the Gozer Worshippers as their own dialect as they faithfully praised the same chaotic god and they wish to bring about a new world through him by awaiting his coming and the destruction of the Earth.

The Cult of Gozer employed Gozerian in both their sub-culture and in summoning rituals and generating barriers. The Gozerian Alphabet and its symbols could be seen adorning on their ceremonial clothing and inscribed on various objects.

In combat, Cultist Summoners who are the Gozer Worshippers' high priests, chants in Gozerian and summons lesser entities such as the Flying Skulls.

After Idulnas possessed Janosz Poha, he wrote Gozerian on the wall of Poha's cell at the Parkview Psychiatric Hospital. 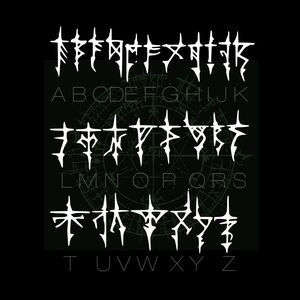 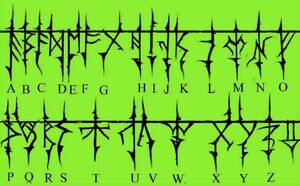 The letters of the Gozerian Alphabet. 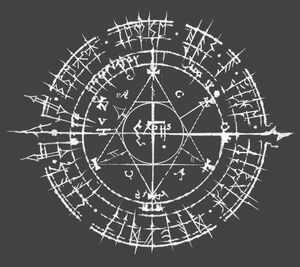 This circular magic symbol is consisted of all the letters of the Gozerian Alphabet.

"For the best solution is Death."
Add a photo to this gallery
Retrieved from "https://evil.fandom.com/wiki/Gozerian_Alphabet?oldid=112393"
Community content is available under CC-BY-SA unless otherwise noted.