The results of Biff getting the Almanac caused a series of events that led Biff into become one of the most powerful man in Hill Valley. In 1958, when he became 21, Biff Tannen instantly became a millionaire overnight by betting on a horse race. As the years went by, Biff kept on betting on various sports events, including football, baseball, basketball, and various other sports, and every time, Biff won every bet, which eventually earned him the nickname "The Luckiest Man on Earth" (as shown on the local Hill Valley Telegraph newspaper). And because of the Almanac, Biff used his money to legalized gambling, purchase the police in Hill Valley, start a company known as BiffCo, dismantled Hill Valley's Clock Tower and replaced it with Biff Tannen's Pleasure Paradise Casino and Hotel, murdered George McFly on March 15th, 1973 (, and no one was able to find out who murdered him), and married Lorraine Baines McFly roughly a few months later. 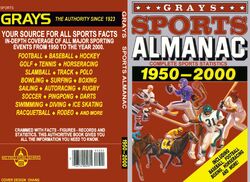 Retrieved from "https://evil.fandom.com/wiki/Grays_Sports_Almanac?oldid=17805"
Community content is available under CC-BY-SA unless otherwise noted.