The Great Maze (also simply known as the Maze) is an evil location and place in The Keys to the Kingdom series, a demesne that was ruled by the wrathful Sir Thursday. It was the fourth demense that Arthur gained control of as the Rightful Heir.

The Maze is a gigantic, chessboard-like arrangement of one thousand by one thousand terraformed tiles, whereof each is one mile long and one mile wide. At each sunset, the tiles change their locations, allowing any attackers to be split and easily attacked by the Glorious Army of the Architect; a means known as Tectonic Strategy. There are several fixed tiles, such as the Citadel, Fort Transformation, and a few others. The Citadel is the main Headquarters of the Maze, where Thursday himself makes his residence, and Fort Transformation is where new recruits spend a year of training before going on to serve the last 99 years of their tenure in one of the various factions in the Army.

Tile 500/500, one of the four central tiles, is the “master tile” of the Maze, in that no other tile may move its location unless this one is unhindered. Therefore, to fasten it in place (as in the novel Sir Thursday) is to render the Maze immobile.

At one end of the Maze is a mountain range. Within this range is a tunnel that connects to the Void of Nothing, by which controlled amounts of Nithlings are allowed into the Maze so that the Army may fight them. There are four gates within the tunnel; one gilded in gold, one in silver, one in bronze, and finally an Immaterial gate, the “Cleargate”. Each gate is operated by a single lever in the Border Fort above the tunnel. The gates are opened in various ways depending on the amount of Nithlings Sir Thursday wishes to be brought into the Maze.

During Sir Thursday, all four gates were opened against rules, whereupon a vast, uncontrollable amount of Nithlings entered the Maze. Unlike the Nithlings Denizens are used to fighting, these Nithlings are smart, organized, and near-Denizen in their attributes. It is revealed that these Nithlings are under the command of the Piper. The New Nithlings then took control of the Border Fort, and kept the gates open past when they were to be closed, allowing huge numbers of New Nithlings to enter.

After the deposition of Sir Thursday, the New Nithlings still controlled much of the Maze, despite their losses in a battle against all Denizens loyal to protagonist Arthur.

As of Superior Saturday, the Citadel became the base of Arthur's operations in the absence of the Lower House and Far Reaches. When the New Nithlings damaged the mountain wall that barricaded the Maze from the Void of Nothing, this put the Maze in danger of dissolution.

During Lord Sunday, the Glorious Army of the Architect flees to the safety of the Middle House after Dame Primus was unable to deal with the damage to the mountain shield. Suzy appears and quickly is whisked away by a rearguard led by Marshal Dusk as Nothing dissolved the Citadel. Later when Leaf became Lieutenant Keeper of the Front Door, she sensed the Great Maze collapse into the Void.

However, the Maze might later rebuild by the New Architect after the horror ends. 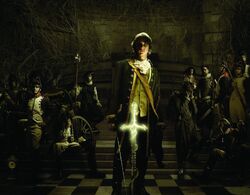 Arthur in the Great Maze, with the Fourth Key/Thursday's sword in front of him, and Sir Thursday and the Glorious Army behind.
Add a photo to this gallery
Retrieved from "https://evil.fandom.com/wiki/Great_Maze?oldid=16453"
Community content is available under CC-BY-SA unless otherwise noted.