Thousands of years ago before Ninja Gaiden

To slowly kill whoever bears the Grip of Murder curse.

To kill Ryu Hayabusa for interfering with the Lords of Alchemy's apocalyptic agenda.

The Grip of Murder (in Japanese: 呪術「殺戮の兇手」 Jujutsu: Satsuriku no Kyoushuu; Sorcery: Evil Hand of Slaughter) is an ancient, alchemical Slavic curse that poisons and kills its infected victims with the increasing hatred and malice of people they murdered and it is used by the Regent of the Mask, a dangerous high-ranking member of a powerful cult of modern-day alchemists known as the Lords of Alchemy. Also another skilled spellcaster among the ranks of the Lords of Alchemy is the cult's charismatic leader and Cliff's grandfather Ashtear Higgins who too is capable of mastering the Grip of Murder and he will not hesitate to inflict it upon those who would dare to oppose him and his followers.

The Grip of Murder is an ancient Slavic curse used through powerful alchemy and a medium that held the malice and hate of the wielder's victims. The curse imbues the victim's arm with the pain and suffering of all those who the victim has cut down. This leads to excruciating pain for the victim subjected to this curse, rotting it from the inside out until it inflicts the whole body, killing the victim. The inflicted arm then glows a bright red as the curse over takes it. Under normal conditions, the curse leaves the arm with deep red veins growing over it. As it progresses, the curse spreads further covering the victim's skin in red markings.

To start the curse, the spellcaster needs to place his blood upon the weapon in question, perhaps through either several wounds or one serious one. Another stipend might be that the caster has to be within physical contact of the weapon. To remove the curse, an alchemist (seemingly) needs to be in contact with the weapon of one cursed, and needs to be fatally wounded while chanting the incantation.

After coming into contact with the Regent, Ryu Hayabusa is subjected to the curse when he cuts into the Regent's body. As Ryu cuts in, the curse causes Ryu's Dragon Sword to be absorbed into his arm, losing his blade in the process. This causes Ryu to collapse, holding his arm from the intense pain. Weakened and without a weapon, Ryu attempts to grab the Regent's sword, who easily stops Ryu and informs him of the curse before disappearing.

Ryu's arm glows red from the many enemies he cuts down as he fights while cursed, and this enables him to use his teleporting ultimate technique. Under normal circumstances, his weapon would be glowing instead from the essences of his fallen enemies.

During some fights, Ryu will enter the Grip of Murder Mode when the curse activates, in which he became temporarily invincible (as the health is not present during this mode), every attack became the Steel to Bone Techniques, but these advantages leaves Ryu unable to jump, block and run. In the Wii U version, however, the curse drag Ryu into his inner consciousness, forcing him to play the Grip of Murder Survival game. The rule is that Ryu has to kill all enemies before his health runs out.

The only thing that seems to ease Ryu's pain on the curse is the Eye of the Dragon, but he needs his disciple Momiji to use the jewel's power.

As the story progresses, the curse spreads over Ryu's entire right arm and begins moving on his shoulder, upper right chest, neck and right cheek. Even his right eye has changed from green to red. After Ryu defeats the Regent who was revealed to be Canna's long lost father Theodore Higgins for the final time, the alchemist sacrifices himself to remove the curse from the ninja's arm. 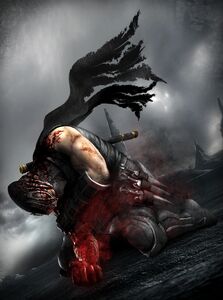 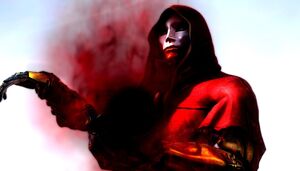 The Regent of the Mask demonstrates the deadly curse of the Grip of Murder. 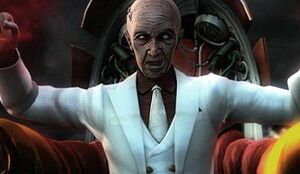 Chairman Ashtear Higgins utilizes the ancient curse of the Grip of Murder. 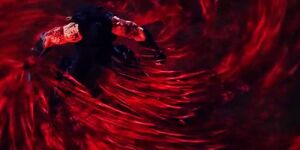 Beware of the curse of the Grip of Murder.

The Grip of Murder 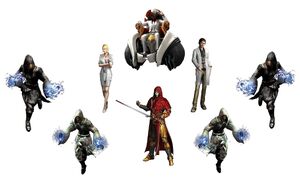 The Lords of Alchemy
Add a photo to this gallery

Retrieved from "https://evil.fandom.com/wiki/Grip_of_Murder?oldid=49496"
Community content is available under CC-BY-SA unless otherwise noted.