This magical concoction was created by the Gummi Bears using the magical Gummi Berries.

This potion had amazing qualities that allowed the Gummi Bears to become super-fast, agile and "bouncy" - to the point the normally fragile bears could out-pace a small army of ogres.

The potion, if consumed by a human, would grant immense supernatural strength.

For this reason towards the enchanted Gummi Juice, the devious Duke Igthorn of the dreaded Castle Drekmore was forever seeking a way to either steal the Gummi Juice for himself or find a means to force the Gummi Bears into making it, so he may use it to become an invincible conqueror.

In the series, the Juice was used as a major plot device with the villainous Duke Igthorn, trying get a good supply of the juice or the recipe to create mass amounts to grant himself and his ogre army super strength, but the enchantingly brave Gummi Bears would always foil his evil schemes in the end.

The recipe was known only by Grammi Gummi until she later taught it to Sunni Gummi. The juice is produced by adding 6 handfuls of red berries, then 4 orange berries, 3 purple berries, four blue berries, three green berries and one yellow berry. The recipe ends with the three-step-stir: first stir slowly to the right, then stir slowly to the left, then bang the pot to banish the bubbles. This apparently also stabilizes the magic concoction.

When it is drunk, Gummi Bears gain the ability to bounce at unusual heights for a limited amount of time; falling from heights which would normally be fatal to a Gummi will only cause them to bounce like rubber. Ducks and other avians are granted identical bounciness. The ability to direct themselves while powered by the juice, such as bouncing along the ground, is not instinctive to Gummi Bears and must be learned, as the Barbic Gummis quickly find out.

Ogres and humans both gain super strength for a much more limited amount of time. Drinking too much Gummiberry Juice has unforeseen side effects on the consumer, and the abilities gained from drinking the juice can only be used by humans once per day. Which this in mind, Cavin and Calla only drink the juice if asked to do so by the Gummi bears, and if given a dose for later, will only drink it in an emergency. Ogres are shown to be able to drink the juice and use its effects repeatedly. Accordingly, Duke Igthorn arranged his unscrupulous tactics to attack in waves to allow for his troops to take maximum advantages of dosages. The juice can also serve as fuel for the various Gummi vehicles.

If the juice is produced inaccurately from the recipe, the results have adverse outcomes, though nothing fatal. Grammi Gummi tried to teach Sunni Gummi for the first time how to make the juice. Grammi demonstrates the stir technique, but when it's Sunni's turn, it ends in disaster. She stirs the pot too vigorously and then bangs it too hard, causing the unstable magic of the juice to explode, covering Sunni, Grammi and the entire kitchen in juice. More than once, Grammi has sabotaged preparation of the juice while a prisoner of Duke Igthorn in order to thwart him and escape, but he was no longer fooled by her tricks and reacted accordingly, such as forcing his minions to be test subjects. 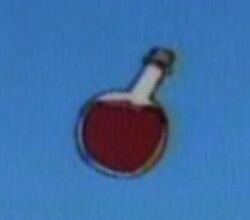