The Evil Wiki
Register
Don't have an account?
Sign In
in: Villainous Tools and Other Items, Magic, Paranormal,
and 2 more

To conjure paranormal occurrences or to curse people.

The Hand of Glory is a legendary dark magic object that is believed by some to hold a variety of supernatural powers, although largely the stuff of folklore there are actual Hands of Glory on display in a few museums in England - though whether or not such objects hold any supernatural power is a matter of considerable debate.

The Hand of Glory is said to be the dried and pickled hand of a man who has been hanged, often specified as being the left hand, or else, if the man were hanged for murder, the hand that "did the deed.".

According to old European beliefs, a candle made of the fat from a malefactor who died on the gallows, virgin wax, and Lapland sesame oil - lighted and placed (as if in a candlestick) in the Hand of Glory, which comes from the same man as the fat in the candle - would have rendered motionless all persons to whom it was presented.

The candle could only be put out with milk. (In another version the hair of the dead man is used as a wick, also the candle is said to give light only to the holder.) The Hand of Glory also purportedly had the power to unlock any door it came across. 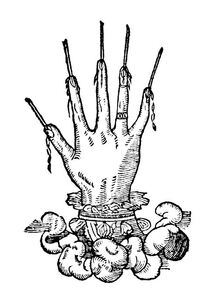 The Hand of Glory in medieval artwork. 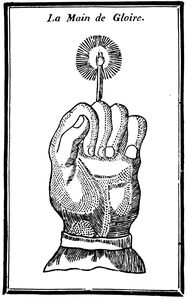 La Main de Glorie ("The Hand of Glory" in Latin). 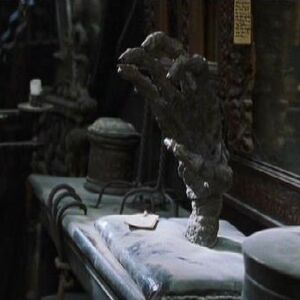 A Hand of Glory in the Harry Potter movies. 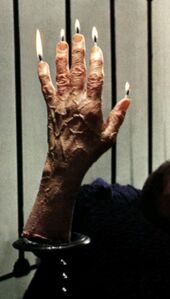 A Hand of Glory in the 1973 thriller The Wicker Man.
Community content is available under CC-BY-SA unless otherwise noted.